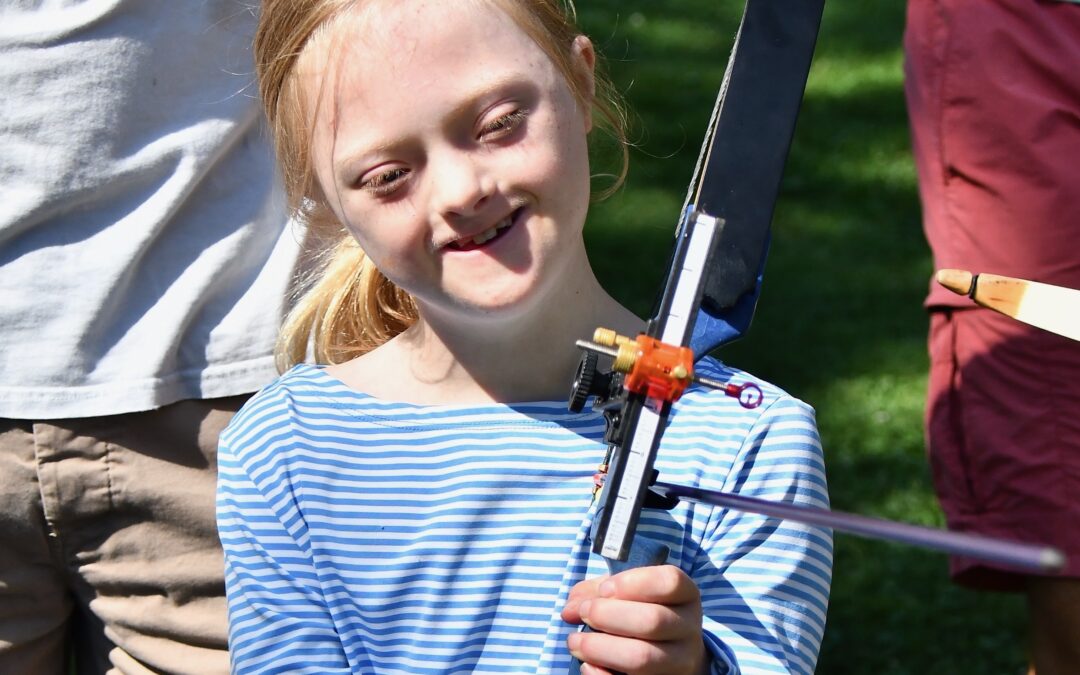 My daughter Snow was born Dec. 1, 2009, one minute before her twin brother.  The delivery was a welcome conclusion to a difficult pregnancy complicated by fourteen weeks of bedrest.  Things went smoothly with the delivery, and I held both children briefly before the staff transferred them to the NICU for further care to address minor respiratory problems since the children were six weeks premature weighing a little over four pounds each.  We were tired, but joyful to be first time parents with two beautiful children.

Two hours later the neonatologist came to our room to update us on the twins.  We were shocked when he explained that our daughter had a number of physical features that led him to believe she had Down syndrome.  The euphoria of our new parenthood was quickly replaced by uncertainty and fear.  Worst of all, I was not allowed to walk down the hall to the NICU to hold my babies because I was restricted to my hospital bed for 12 hours after the C-section.  I can still cry remembering those painful hours…Days later a genetic test confirmed the diagnosis.

The new few weeks were tough.  Learning to care for twin infants under normal circumstances is a challenge.  Our experience was compounded by the anxiety and confusion of a diagnosis we did not expect nor understand.  Between feedings for both twins, which required one-on-one attention for Snow, weekly weight checks with the pediatrician, and new appointments with many pediatric specialists, I somehow scheduled a rotating group of therapists to come to our home and work with our daughter.  During this crazy time, I began to search out other families who had older children with Down syndrome to seek advice and support mainly through the Down Syndrome Association of the Upstate.  We also learned from and relied on the knowledge, attention, and love given by our baby nurse, beloved sitters, and family and found acceptance amongst peers at Kindermusik, The Little Gym, YMCA, Kroc Center, and Christ Church Episcopal.  Slowly, bit by bit, we began to see a pathway forward.

We soon discovered the Meyer Center, where all of the disjointed therapies that we needed for Snow could happen under one roof.  This team approach allowed our daughter Snow to get more total therapy each week in an integrated fashion from experienced professionals who worked together for a common goal of advancing all aspects of our child’s development. In these early years I poured over countless books about Down syndrome, namely by Professor Sue Buckley, OBE, David Stein, PsyD., and Brian Skotko, M.D., and more books on inclusion from acclaimed experts Pete Wright, Esquire, Julie Causton, Ph.D., and Cheryl Jorgansen, Ph.D., all of whom pointed out the benefits of being in classrooms with neurotypical peers.

“Almost 30 years of research and experience has demonstrated that the education of children with disabilities can be made more effective by having high expectations for such children and ensuring their access to the General Education curriculum in the regular classroom to the maximum extent possible.”

I realized later to achieve the goal of inclusion in grade school, time spent at Christ Church Episcopal Preschool could be beneficial.

On the first day of kindergarten, I encountered immediate pushback from the General Education Teacher who called me and seemed incredulous that Snow should be in her classroom for 96% of the school day.  Despite the evidence of positive outcomes from spending more time with peers, the model that was repeatedly presented to us separated Snow from her peers.  With the help of national and local civil rights advocates and attorneys, we attempted to change the dynamics, but ultimately found what was best for Snow was to revoke consent for these special education services under the federal law and withdraw from public school.

Today she is thriving at home with a uniquely designed 5th grade educational program that advances her reading significantly, incorporates grade level math, and increases the frequency of speech and occupational therapies.  Socially she participates and excels in a variety of recreational sports and leisure activities with same aged peers, including tennis, golf, gymnastics, basketball, horseback riding, and Sunday school, and she also thoroughly enjoys many camps in the summer and extreme adventures with her family.  We believe she is capable of earning a high school diploma, attending college, and finding gainful employment.  We expect her to lead an independent, productive life filled with accomplishments, love, and friendships.