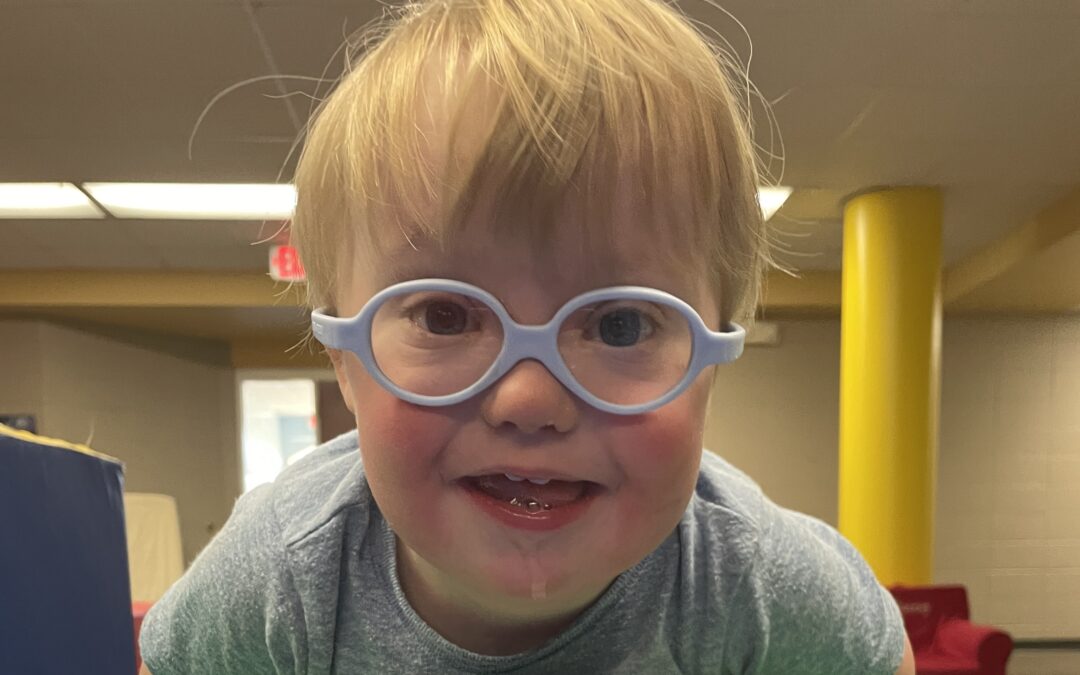 It has been a full year! Ransom is an active 2.5 year old, always pushing boundaries and exploring new things. He’s a proud big brother to his sister, Darby. We’ve seen great progress in Ransom’s overall development. His therapy team has been enthusiastic about his growth, especially his verbal skills (the boy repeats everything). He has conquered a variety of fine motor skills and started walking “full time” this month!

Ransom attends WWS 3-days a week and has a blast with his teachers and typical peers. He has picked up a lot from his friends there; often repeating songs and mimicking games they play. Though this past year has been full of joy & fun memories, it has had its challenges. We worked through several dietary issues. Ransom has celiac, which is common with a DS diagnosis, and is on a gluten free diet. We’ve been learning new gf recipes and finding gf products & aids. He was having other dietary issues that took some time to pinpoint, but thankfully we’ve identified the problem (eggs) and avoid those now as well. Ransom started wearing glasses this past year, and got orthotics to aid in his gross motor development. Last year we also started noticing symptoms of sleep apnea, which is also common with Down Syndrome. He was restless throughout the night and snoring some. After a year+ of doctor’s visits, sleep studies, and a lot of waiting, it was confirmed he has moderate sleep apnea and received a CPAP this August. Trying to get a 2 year old to wear a CPAP is a challenge. Honestly, I’m not sure I could wear one! It has tested us but we’ve seen major physical & verbal growth spurts this fall, which we believe is partly attributed to the CPAP.

Like any child, there are challenges to raising Ransom, but the joys of being his parents far outweigh the work. He is so much fun! He enjoys pushing his trucks, pretending with animals, and occasionally watching his favorite show, All Engines Go. He has a great sense of humor, and loves music. He’s very outgoing and recently had his modeling debut at the Fearfully & Wonderfully Made Fashion Show.

Ransom isn’t the only one who has grown this past year. Anna and I have learned so much from Ransom’s team and about the capabilities of people with Down Syndrome. We’ve witnessed how determined Ransom is and experience joy with all of his accomplishments. We’ve had moments of impatience and worry, but through it all we’ve trusted that the Lord has us in His care. We continue to see how loving God can be and how He has carefully created each of us.