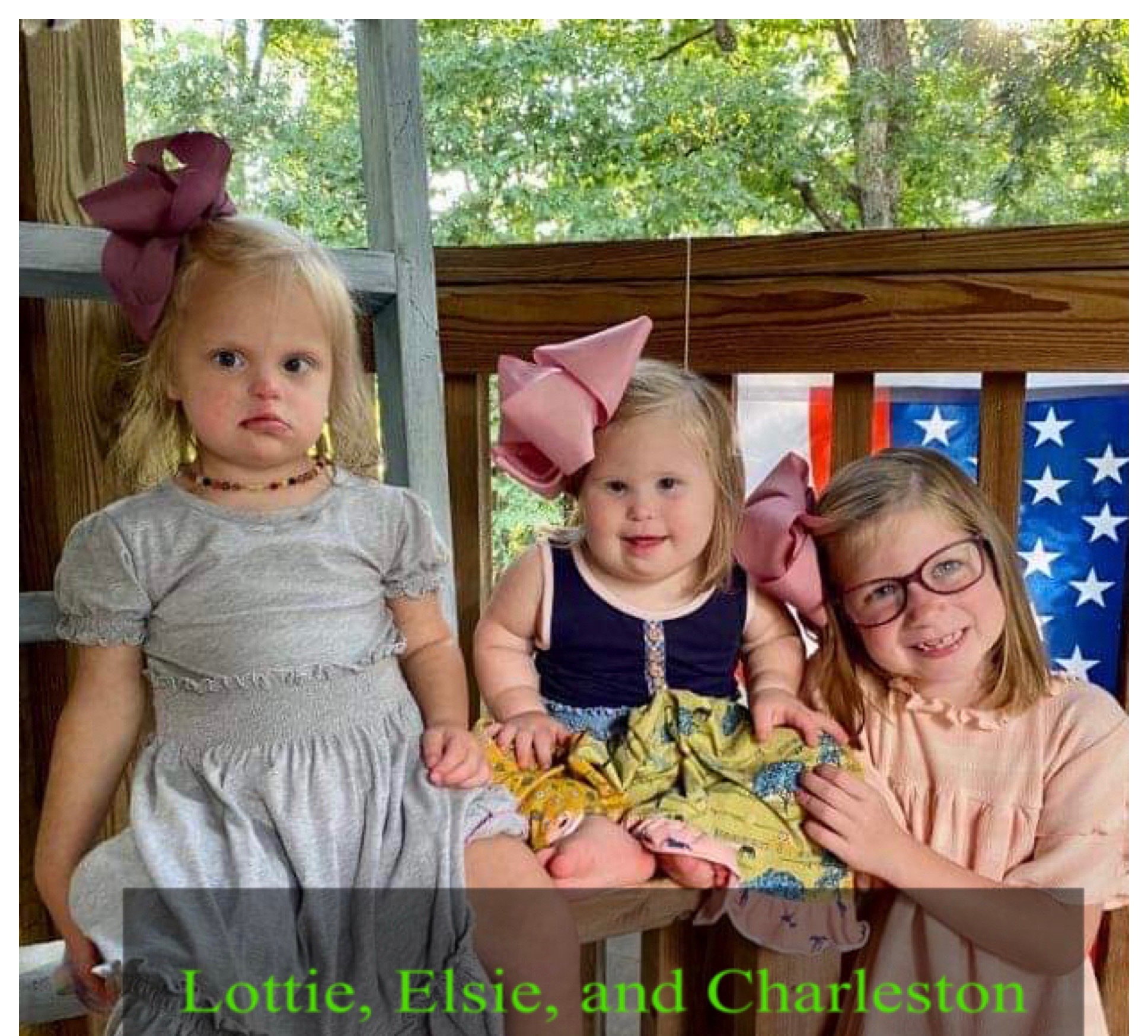 We are the Millers, a wide-open family of 10! We would have never guessed that we would have had this many loving children; however, just under a year ago, we brought home two of the sweetest additions to our family.

Christian and I (Megan) were married almost 14 years ago and began what we knew would one day be a big family. We had our first early on in our marriage and stair-stepped them from that point on. Our oldest is Bentley 12, then Sawyer 10, Flynn 8, Charleston 6, Portman 3, and Gaines 1. After 10 years of waiting, and finally owning the crazy train, we figured now was the time to adopt. We initially sought to adopt a child with special needs domestically, however, after a picture of our daughters was sent to us, it was off to Ukraine! Lottie 5, and Elsie 3, have been with us for 1 year, and it has been quite the journey!

All three of our girls Charleston, Lottie, and Elsie come with their own special needs and challenges. When Charleston was born, being a girl was a complete surprise. We elected not to find out the gender as we already had three boys. We were elated that we finally had a baby girl after years of having children. When she was 18 days old, she spiked a fever that sent us to the ER, and then a lengthy hospital admission. For almost the next two and a half weeks she laid in bed, lethargic, pale, fighting to break a fever with no source for the fever and no response to any medications. At one point we had family come in because there was a great chance she was not coming home with us. It wasn’t until infectious disease (ID) came in to save the day. ID was extremely displeased that they had not reached out sooner and that we were only alternating Tylenol and Motrin for almost three weeks. They had a few tricks up their sleeve, and less than a week later we were being sent home with a scalp line giving antibiotics at home. I remember thinking we were never going to bring out daughter home again. It was at that time the scariest point of our lives.

Things were hit or miss for the next 8 months. She did not gain much weight, was always very petite for her age, and just never really thrived. We had a similar incident again, sending her to the ER and then another hospital admission. Not even a year old and fighting for her life again. This time she had contracted RSV from a friend’s child, and it took a stronghold that refused to let go. Once she recovered, her infectious disease doctor decided to do some testing, to see if there was anything we could find out. After numerous blood drawings, and injections, it was determined that Charleston suffered from Common Variable Immunodeficiency, (CVID), no CD8 T cell count, Igg Subclass deficiencies, and a handful more IgA deficiencies.

Common variable immune deficiency (CVID) is a type of primary immunodeficiency, which is defined as an immune system dysfunction typically caused by a mutation in a gene or genes. CVID manifests a wide variability of symptoms and range of severity. It is considered a genetic condition and most of the causes are still unknown. CVID is characterized by low levels of specific proteins (immunoglobulin) in the fluid portion of the blood. This results in a loss of antibodies and a decreased ability to fight invading microorganisms, toxins, and other foreign substances. These immunoglobulins are produced by specialized white blood cells (B cells) as they mature into plasma cells. This was causing repeat infections without the ability to fight them, diarrhea, malnutrition, no weight gain, and overall poor health status. It was determined that she would go on IVIG infusion treatments. These started as an IV, but a few months in and her body could not handle the monthly IV sticks, and infusions. It was then determined that she would need a perma-port. This port would be a central line, dedicated to the use of the infusions she was receiving every 28 days. It was almost instant a change in her condition. Her body was now lively, thriving, and able to fight. It is not without side effects though, typically the three days following her infusion are followed by symptoms of aseptic meningitis. When the time is near for her to receive an infusion, she becomes more tired, lethargic, and pale. This infusion truly is the life force of someone with CVID. We are not sure how long she will be on the infusions, perhaps forever, but right now they will continue until something changes.

Lottie and Elsie both came from the same orphanage in Dnipro, Ukraine. The girls have both spent all of their lives at this point in this orphanage because they had “syndrome down” according to the Ukrainian medical system. If that confused you, both Lottie and Elsie both have Down syndrome. They both have Trisomy 21, or an extra copy of chromosome 21. Common physical traits of Down syndrome are low muscle tone, small stature, an upward slant to the eyes, and a single deep crease across the center of the palm – although each person with Down syndrome is a unique individual and can have any array of these traits. The extra genetic material makes them also cognitively impaired, learning at various rates.

Lottie was once a stoic, irritable, lost little girl who now loves unconditionally, and seeks affection from anyone willing to give her some love. For so long she was left alone in a crib, sedated due to her spunky nature, and never had a chance to live. Every day is still a new day with loads to explore and learn. Since being HOME, she has learned to not only walk but run, swim, ride a kiddie car, and she loves to play on slides. She is presently non-verbal; however, she understands English much better than she ever understood her once native language of Ukrainian and Russian. She is living proof that with a strong will, and a desire to learn and explore nothing is off limits.

Our sweet Elsie has not always been so lucky. When we adopted Elsie she was 2 and a half, weighing a mere 14lbs. Our 3 week old weighed 11lbs for comparison. She was frail, sickly, weak, blank, and lost. She had never known food as we do and no one could have thought that the very thing she needed would be the cause of a life and death scare. Everything that Elsie ate her body would purge. Our entire time in the country Elsie had loose bowel movements, in fact, they were practically water. On our 8.5-hour flight, 7.5 hours she spent in nothing more than a diaper as Christian held her and changed her leaking diapers every 20 minutes. With the help of some of the best pediatricians in the Upstate, I texted back and forth while on a transatlantic flight to get her the medical care she so desperately needed. After arriving back home, what was supposed to be a joyous family occasion was cut short with the immediate admittance to the ER, then the children’s hospital. Elsie was suffering from Refeeding syndrome, secondary to malnutrition. This is a result of long-term malnutrition, and then being reintroduced to actual nutrients. The body doesn’t know what or how to process it, so it expels it all out of the body quickly. The medical team was adamant that another week, maybe two, and Elsie be better. It took months to get her on an eating plan dedicated to weight gain, and proper nutrition.

Elsie also suffered from a congenital airway issue that manifested itself with us one night when she became apneic. She had stopped breathing, and without our daughter Charleston who noticed something was off, Elsie again, may not be with us. After a lengthy PICU stay, we had some answers but the symptoms were still present, and the vigilance to watch her was not without panic and paranoia. Christmas Eve came as we were awaiting family and friends when she stopped breathing again. Another ambulance ride to the ED, a night stay, and now we were pushing a timetable to get more answers. In February, she went under for surgery, a litany of issues if you will. One major concern was the size of her trachea. She had the tracheal opening of a newborn, not a 3 year old. She was also housing a cyst that occluded half of her airway. It was removed, and her trachea was dilated with no reoccurring issues to date. She also is non-verbal but has begun making more sounds with her airway being free from congestion. She is also learning to walk and she’s the fastest bear crawler this side of the Mississippi. She loves to smile, laugh, kiss, hug, and cuddle, but don’t be fooled; she will let you know what she wants in a hot minute. She has found her voice and place in the world and she’s not afraid to tell ya!

Our lives would be so boring without these three amazing girls! They have shown not only us, but each and every person they come in contact with that there is nothing they cannot do. They persevere each and every day despite any challenges that they may face.