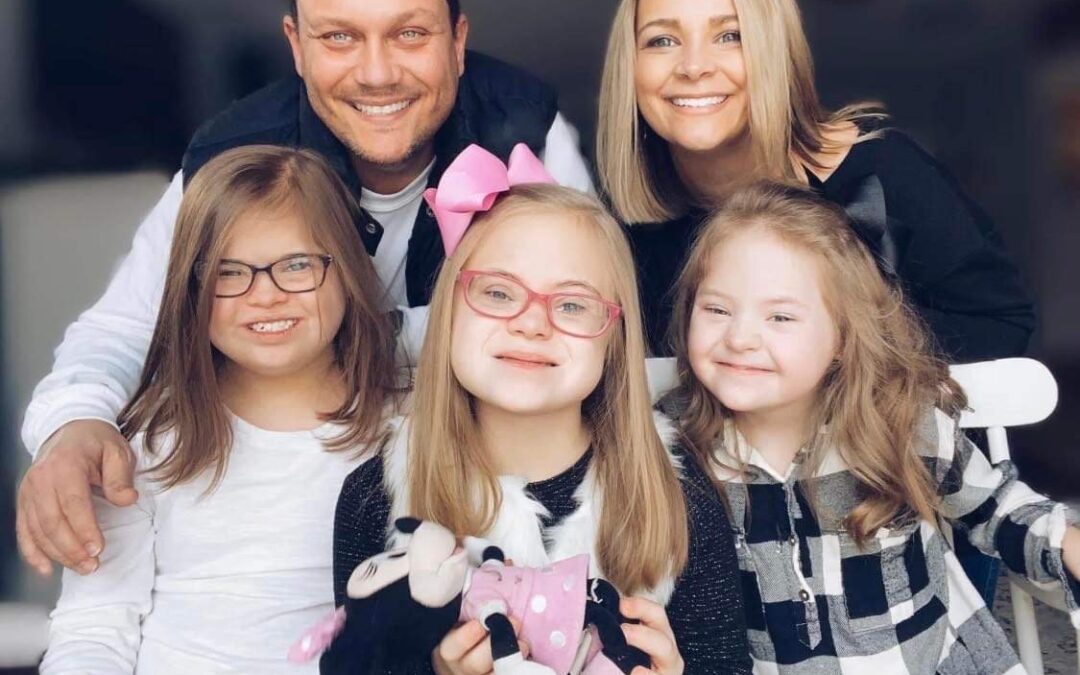 Our family is quite different than many others on the outside but, like many families, we were built from love! Shawn and I (Sarah) got married in 2005 and we both deeply felt that we didn’t want to just “go through the motions,” in this one and only beautiful life! We didn’t initially know what that meant but we explored some common passions within our first 5 years of marriage including traveling and providing weekend respite care to some of my students with Down syndrome.

We decided to move forward with adopting a child with Down syndrome. We officially began the process and about 7 months later found ourselves on a flight to Ukraine to meet our 20-month-old daughter for the first time! We were not prepared for the things we saw, some which remain unspeakable to this day. As young 20-somethings, at that moment, we realized there would be “life before” our adoption and “life after.” It was a line in the sand we hadn’t even realized we had crossed, but once we did it was too late to go back. It was too late to “unknow” all the horrors that existed for these children. It was too late to unhear what dozens of hungry children sounded like while they cried with what little survival instincts they had left, and even worse, what dozens of silent babies and toddlers sounded like as they had learned not to cry because their cries were seldom answered. It was far too late to unsee the terror on our daughter’s face as a certain caregiver walked by or her huge fearful eye as she was force fed with a spoon too big for most adults. It was too late to “unfeel” the other orphans running up and throwing their little hands around our legs while begging, “Mama!! Papa!” We believe God allowed us to see the things we saw to “break our hearts for what breaks his” and, also to understand many years later, the lasting impact trauma can have on a child. Throughout the process, although our hearts were shattered and our brains and bodies were in shock, we never once questioned the fact that Zoya was our daughter or that we were her parents. We just knew. After a grueling 5-week adoption process, with our amazing facilitation team paving the way for Zoya to be adopted (as the first child with special needs from that region), we became parents to a 22-month-old daughter named Zoya Faith. Zoya, now 14, loves makeup, music, movies, and spending a lot of time with her family!

Within the first 6 months home, as we took a crash course in parenting a previously institutionalized toddler with special needs, our hearts continued to ache as we tried to process what we had experienced. The dreams of our daughter’s future were paired equally with nightmares of her past and all the children left behind. Although we didn’t dare speak our thoughts aloud to one another, Shawn and I both knew within those first few months home that we would be returning to Ukraine.

18 months later we returned to Ukraine and met Mila Hope, who was a very ill 7-month-old baby girl with Down syndrome, weighing barely 7 pounds and a pale blue color. Due to lack of medical care, Mila was dying. The only part of her sweet self that looked alive at all was her eyes. If eyes could ever speak, they sure did in that moment as her eyes met mine for the first time. Her stiff body, completely unfamiliar with being held, looked, and felt like a stiff board. Each day for weeks we visited Mila in a very tiny foyer area in the infirmary for about an hour, two times per day. She was amazed to look out the window and perfectly content staring at us and being held for the entire hour. The orphanage staff was astounded at how Mila began to come alive after only 2 1-hour visits per day from Shawn and me. They said they couldn’t understand, initially, how her appearance and health began to change so drastically when the only change was having us visit for two hours a day!  The director commented, “we now realize it is love that she needed all along.” Children cannot survive without love! Every child deserves loving parents. Mila received immediate medical care upon arriving in the U.S. and has been a gift to our family like we never could have imagined! We feel so undeserving of her unconditional love and dozen daily hugs! Mila, now 11, still loves to snuggle just like she did in those early days!

Shawn felt very strongly about returning to Ukraine one more time. I did too, but I was too nervous to take the first step, so I followed his lead! One year later, we returned to Ukraine for the third time to bring our 15 month old daughter, Sofia Joy, home. We were amazed to figure out when given the date that Sofia arrived at the orphanage, that we had been sitting in the foyer and had seen Sofia being carried in by a nurse. We had no idea at the time that we were seeing our third daughter for the first time, nor did we have any idea we would be back a year later to bring her home! It was wonderful to be back in Ukraine and be able to share videos and pictures of our other two children we had adopted. The regional social workers and orphanage staff could not believe the changes in our children, and we strongly feel a seed was planted by those who witnessed the “before and after” of our children. A small ripple can expand very far! Sofia, now 11, is extremely energetic, athletic, competitive, and extremely independent! We feel blessed each day that our three daughters have one another and that we can call ourselves a family!