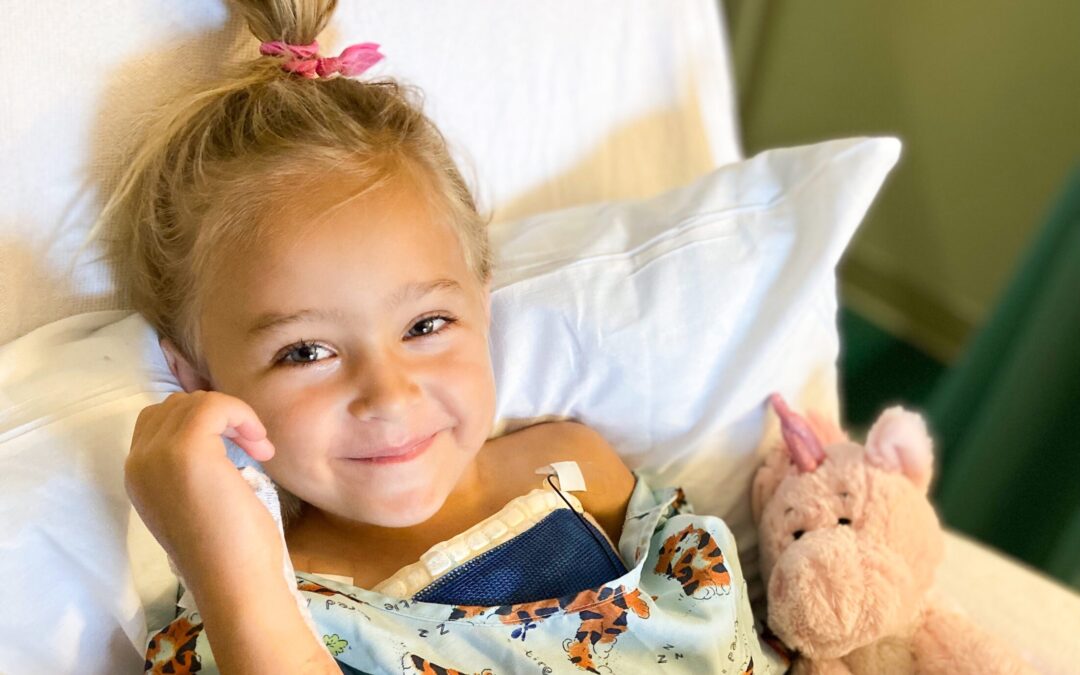 5 years and 6 months ago, our twins were born. For the previous 3 years, Hudson and I had loved raising our son, Wilson, who was very full of life and the easiest toddler there ever was. We were so very excited to add siblings to the mix. We knew Wilson would be a great big brother!

My pregnancy with the twins was less than typical. I found out at my 8 week ultrasound that we were expecting not one, but two babies. Although this was a tad frightening, we were mostly excited. For the first few weeks, everything was normal. But, at my second ultrasound the technician had a very hard time finding baby A. For most of the ultrasound, it looked like baby A had not continued growing…she was no where to be found. The technician took one more look around and thankfully found baby A. However, she let us know that she would not be surprised if we didn’t see baby A at the next scan.

At the following appointment, and subsequent appointments for the remainder of my pregnancy, we were met with both anxiety and excitement. Each ultrasound showed that both babies were continuing to grow but that baby A likely had something going on that would require medical attention.

On February 6, 2016, by scheduled c-section, Sims and Ruthi were both at 5 lb 4 oz and 3 lb 7 oz, respectively. Thankfully, the twins were both doing well, no oxygen was needed for either, both immediately ate. Ruthi did need to be in the NICU until she reached 4 lbs, but Sims came home with us from the hospital.

The afternoon after the twins were born, the Neonatalogist came into our room to inform us that Ruthi had something called VACTERL association. She only had one kidney, had a Ventricular Septal Defect, and two hemivertebraes…a moment in time that will forever be etched into my memory. She would need to be followed by multiple specialists and likely require multiple surgeries along the way.

For the next year, we struggled through Ruthi’s daily feedings. While Sims nursed like a champ, we found that Ruthi just wouldn’t do it, and had equally zero interest in a bottle. I spent 24 hours a day trying to get enough nutrition in her so she could grow. We eventually hired someone to be with me during the day while Hudson was working. This person’s sole job was to hold Sims while I worked tirelessly to get my sweet baby girl to eat and grow. After months of sorting through feeding challenges and also some extreme milk protein allergies, we made the very tough decision to have a g-tube placed for Ruthi (now 15 months old). We needed her to grow, and nothing else was working.

The g-tube did its job. Ruthi was growing, and even getting a little cute pudge. For 3 months, we took a break from oral eating altogether. Ruthi was growing and it was a lot less stressful. All of Ruthi’s nutrition was through her g-tube which was a big learning curve for us: feeding now involved syringes, a kangaroo feeding pump, alcohol wipes, learning how to change out g-tubes at home, bags of formula. But after a while, I wasn’t okay with Ruthi only being fed formula while her twin brother (and older brother) were now enjoying real food. She started feeding therapy and I started the journey of making the food that went into Ruthi’s tube. Every morning I blended what looked like an incredibly disgusting concoction: tahini butter, goat milk, avocado, banana, oil, dates and lots of other very healthy and calorically dense foods. While the formula at times made her violently throw up, the real blood blend sat really well and gave her stomach time to heal.

A few months later, and after consulting with Ruthi’s doctor, we decided that it was time to begin attempting some oral eating again. Ruthi went to feeding therapy once weekly but that just didn’t seem to be helping her make much progress. After learning that there weren’t any local agencies that knew how to get a child off a g-tube, we found an organization based in Seattle that we hired to help us with the tube weaning journey. The organization called “Growing Independent Eaters” were absolutely amazing. In a period of 3 months, Ruthi went from gagging and throwing up whenever something touched her face, to becoming a fully independent eater. We were incredibly happy to be on the other side of the eating battle. Ruthi was eventually able to have her g-tube removed.

Like most families often feel, we seemed to move right from one battle and head on into the next. From the beginning of Ruthi’s life, we knew that there was a very strong possibility that she would develop progressive infantile scoliosis due to her two hemivertebrae. And, that she did. In the midst of her eating battle, we noticed that Ruthi’s back seemed to look more curved than it had in the past. After reaching out to her orthopedic surgeon and getting a new x-ray, it was confirmed that her curve had progressed from about 30 degrees to roughly 60 something within a 3 months time. Her time of waiting and watching was over and now she was headed into “the casting life.”

In July of 2018, at a little over 2 years old, Ruthi had her first cast placed. These casts are used to hold or slow the progression of scoliosis curves. Oftentimes, they can be used to improve a curve but in Ruthi’s case the hope was that it would just hold it. These casts would be placed every 3ish months in the operating room, under anesthesia and intubated. The cast stays on for 24 hours a day for these 3 months. The first few of these were a headache for us all. It took a while for Ruthi to adjust to having a cast wrapped around her body from her armpits down to her waist. They’re hot, especially in the summer heat, make your clothes fit differently, and are prone to irritating your skin. But, we all learned how to make this work for Ruthi because it was a reality we couldn’t run away from- casting was necessary.

Also since birth, Ruthi was followed by a cardiologist who kept an close eye on her Ventricular Septal Defect (i.e. a small hole in her heart). Most appointments were relatively straight forward. Still Ruthi hated these appointments. Each time she needed an echocardiogram and an EKG. Both of these tests are easy enough with the exception of the awful stickers used for the probes. Taking these stickers off is next to torture for a child. But, everything was looking stable and as if surgery would not be needed, so stickers seemed like an easy price to pay.

In August of 2020, while Ruthi was in her 11th cast, we learned at her routine cardiology appointment that things had changed on her echo and EKG and that Ruthi would now need open heart surgery to repair the hole in her heart. The hole was now causing increased pressure and had enlarged one side of her heart. Open heart surgery…open heart surgery. This rocked our already very unsteady boat. I’m not sure how we functioned for the few weeks leading up to her surgery. On October 22, Ruthi was wheeled back at MUSC to fix the hole in her heart. The cardiothoracic surgeon (who I can’t say enough good things about) stopped her heart, put her on bypass and repaired the hole in her heart to make it whole. 8 hours later, we joined Ruthi in recovery and cried lots of tears of happiness and relief. Her hole was gone, everything looked fantastic and the prognosis was that there was a very, very low chance that she would ever have a heart issue again.

As if that wasn’t enough of a roller coaster (and it felt much like the Wayne’s World roller coaster- very bumpy and creeky), we also knew that were getting closer to the time that Ruthi would need a spine surgery. All along the way, Ruthi’s curve was progressing. In fact, it was now sitting at a little more than 100 degrees. It was time to intervene surgically.

In June, Ruthi had surgery in Greenville to remove one of her hemi-vertebrae and had a short fusion. With one major surgery under her belt, we really all felt like pros at this point. This, too, was another very long surgery. Ruthi lost a decent amout of blood and needed a couple of transfusions, but the surgery went well. She woke up in a lot of pain and continued to struggle with pain for a few weeks.

But in true Ruthi fashion, 4 weeks after her spine surgery, she was well and comfortable enough to learn how to ride her bike and continue to show her brothers the true picture of resilience and strength.

Ruthi is now 5 and has just started Kindergarten. She is a walking example of persistence, grace resilience and a true miracle. Ruthi’s medical journey is not over. She is now back in the “casting life” and will require a few more spine surgeries before she can be left untouched. We are unsure at this point of what (if any) issues her solitary kidney might present. We are hopeful that her heart remains strong and healthy. But, above all else, we are so very proud of how seamlessly Ruthi goes about her day just like any other 5 year old does.

We’ve said for years, that raising a child takes a village. That statement could not be any more true. We have been extremely blessed by the love and support of our family, friends and Ruthi’s incredible doctors. We are also very grateful to the Spartanburg community who spend their time investing in children’s educational and medical resources and also instilling in their own children the simplicity and importance of the act of being kind. Each person and child is unique and that is what makes the Kingdom of God such a special place. My husband and I founded a nonprofit called The Roo Crew in honor of our Ruthi “Roo.” The mission of this organization is to assist and support families with children who have special medical and/or educational obstacles. We truly believe that it “takes a crew!”