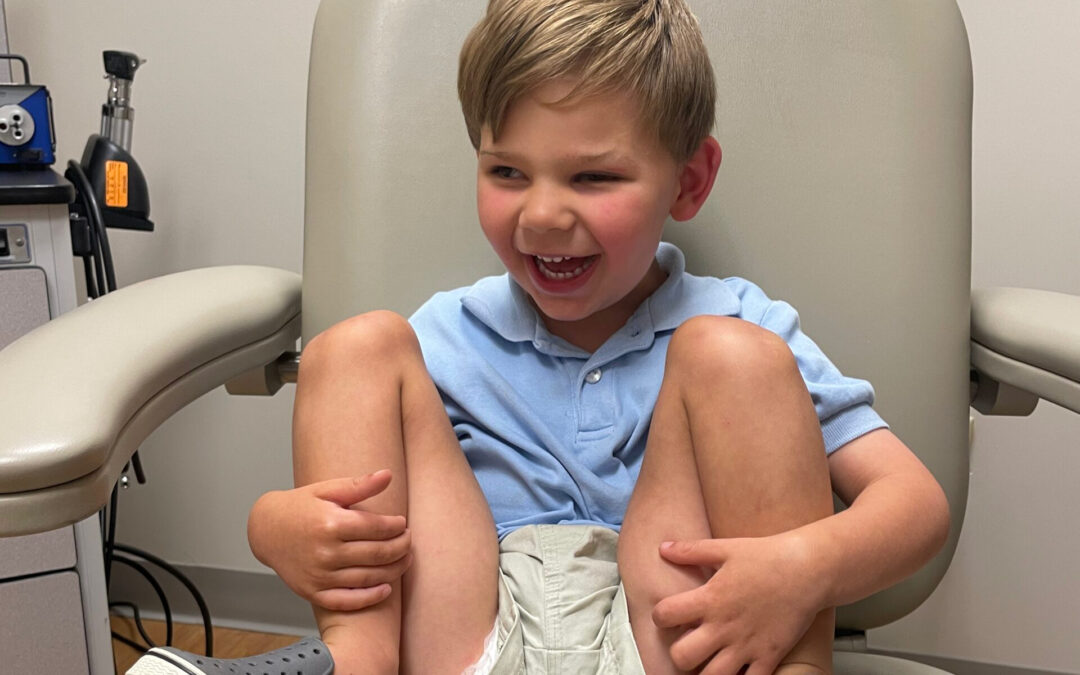 When my son Row was 8 weeks old, my husband and I started a long journey and hard season to find outa that our son has a rare genetic disorder called KIF11. For Row, the KIF11 mutation has affected him in a couple of ways. He was diagnosed with Bilateral Persistent Fetal Vasculature (BPFV- a rare eye condition which caused his eyes not to develop appropriately in utero), Microcephaly (small head size), lymphedema localized to his feet (fluid that retains on the top of his feet), aspiration which resulted in a Gtube, and epilepsy (seizures).

Row’s biggest challenge is blindness. His left eye is completely blind and surgery was not an option due to the severity of the eye’s underdevelopment. Row wears a scleral shell in his left eye so it will cosmetically appear as the right and allow his orbital bone to grow appropriately as he ages.  Row’s right eye was deemed his good eye after being diagnosed with BPFV. There was hope he would see big objects one day out of that eye after surgical intervention. Unfortunately, after three eye surgeries at The Duke Eye Center to try to reattach his detached retina in his right eye, he only has some light perception. But, despite Row’s KIF11 diagnosis and blindness, he is a typical 3 year old!

Row is defying all the odds and is thriving in a school environment with his typical peers.  Row is different than his peers at school due to his blindness but he is also very much like them. He loves to swing, listen to music, dance, jump on the trampoline, wrestle with the boys, swim in the pool, watch tv, play on the playground, ride his scooter, play baseball, basketball, soccer and golf. The list goes on and on. Truly, Row is more like his peers than different.

The more our children are educated that it’s okay to be different and are submersed in environments around people who are different than them, the more they will learn to be kind and inclusive. Through Kind of the Upstate, I firmly believe children, parents and educators can learn that children and people with special abilities like Row are just like everyone else despite their difference.  We are all truly more alike than different.