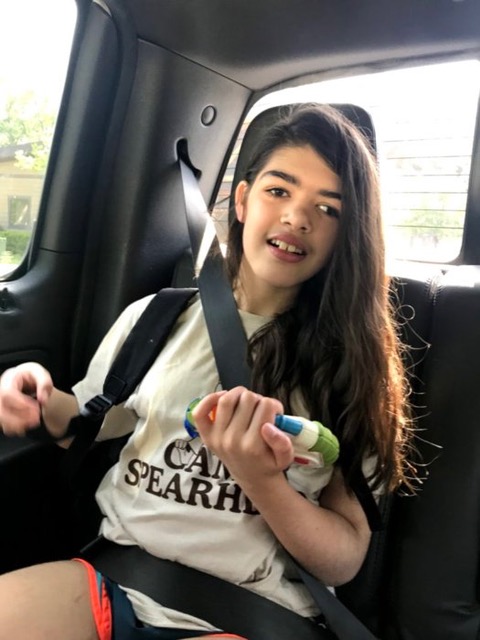 On October 28, 2006, our family was made complete with the addition of our daughter, Mary.  A true third child, Mary was by far the easiest baby of all three children.  We dragged her from soccer, to dance class, to kindergarten performances.  She was a very content baby, and she would willingly roll along with little fuss.

It wasn’t until Mary was nine months old that we decided to see our pediatrician about the continued small “twitches” we noticed Mary was experiencing.   It was then that our doctor brought to our attention several developmental milestones that our content little girl was also missing.  The “twitches” and the missed milestones – she couldn’t yet sit up or hold a cup – we learned constituted a “constellation of symptoms” indicating a far bigger concern.

We quickly learned that Mary’s “twitches” were in fact Myoclonic Seizures and after many, many tests she was diagnosed with a probable unidentified Mitochondrial Disease.  Immediately she began working with an early interventionist along with physical, occupational, and speech therapies to try to ward off any further developmental delay.  All while experimenting with multiple medications to try to stop the seizures that were continuing to cause more damage to her developing brain.

Over time Mary’s development slightly progressed to that of about a two-year old child, but her seizures got progressively worse.  She began to have multiple types of seizures daily.  These seizures were very violent and life threatening and the doctors could not figure out how to stop them.  We traveled around the country seeing specialists, and trying experimental medicines, and special diets, but nothing seems to stop the seizures.

Mary’s local neurologist, Dr. Morales, was absolutely amazing.  He walked with us through this dark time reaching out to other doctors for answers, recommending places to go and treatments to try that might give Mary’s brain a much-needed reprieve from the continuous seizure activity.  One of the doctors he had us meet was Dr. Neena Champaigne at the Greenwood Genetics Center.  The team there ran various genetic panels for common seizure disorders, however, none provided any answers.  We were finally convinced to run a full genetic exome sequencing.  Through this testing, it was discovered that Mary had a very rare, yet to be named, Epilepsy disorder caused by a variation in a recently identified gene – CUX2.  The GGC matched Mary’s gene variation up with 9 other children who all presented just like Mary and all who had successfully been able to stop their seizures with a medication we had not yet tried.

Today Mary is 15 years old and almost SIX years seizure free thanks to the perseverance of Dr. Morales and Dr. Champaigne.  Her development remains that of a nonverbal two-year old.  She goes to school at the Washington Center, she loves to swim, ride in the car, and watch the Backyardigans.

Mary has transformed our family beyond belief.  Our journey thus far has brought us many challenges, but it has also brought us great JOY!  Humbly we will tell you that Mary’s older sister, Emma, and older brother, Sam, are two of the most amazing humans you will ever know.  We truly believe they are these people because they were raised in a family with a special needs child.  We are further humbled by the fact that God chose us to be the family for this amazing child and it is truly an honor.

One recent Halloween we were sitting on our front porch handing out candy.  Mary was in her push chair watching the Backyardigans on her hand-held player.  A little girl came up on the porch and was looking intently at Mary.  The child then looked at us and asked, “Is she special?”.  “Well, yes she is”, we replied.  The little girl’s face lit up with the biggest smile and she declared, “We’ve got one, too!”.  The pure joy and pleasure this little girl felt over the unique gift we all shared were evident.  She knew what we know: that we all in fact were the special ones because we each had someone like Mary in our lives.