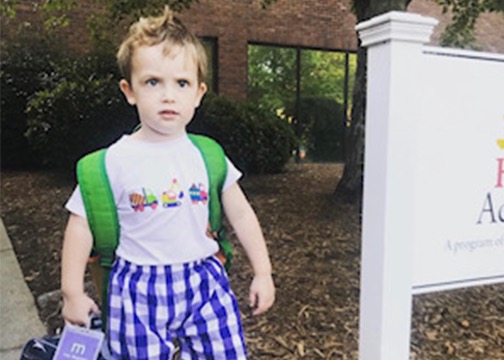 I am so honored to share our precious son Mac’s story and support the important organization KIND. Mac is a very typical superhero loving, basketball playing 6 year old. He loves playing with his friends, cousins, and siblings. He has a special way with words and a wonderful sense of humor. His determination and thoughtful spirit inspire me daily. He is beginning mainstream class for the first time this Fall. Mac has worked so hard to get to this point and we couldn’t be prouder of him and grateful for all the therapists and teachers that have supported him along the way.

My pregnancy with Mac was uncomplicated and he was born on May 30, 2015. There were no complications at birth and we were all overjoyed for him to join big brother, Taylor and big sister, Mary Frances. However, almost immediately after we brought him home from the hospital, he began getting sick. He had pneumonia multiple times, was hospitalized, endured many visits to the ER with breathing difficulties and numerous surgeries, tests, and procedures. We went from one appointment to the next trying to figure out what was causing him to be so sick. During this time we also began to have some concerns about his development and our pediatrician referred us to baby-net.  Mac began multiple weekly therapies and worked so very hard. Our hope was that he would eventually catch up and all of this would be behind him, but as the last year of baby- net (a program that lasts until they are 3) drew closer it became clear that this was not going to be the path for Mac. So, once again we began the search for answers.

This was one of the most challenging years of my life with so much uncertainty, but God was right there and provided in the most amazing ways. In addition to the support from our wonderful friends and family God put people in our lives at just the right time. We were embraced with love and kindness by a community of therapists, teachers, and specialists that no doubt are the hands and feet of Jesus here on earth. One therapist lovingly guided, advocated, nurtured, went to appointments, encouraged, listened, loved and basically held my hand through that year when Mac was being diagnosed. She loved Mac and advocated for him like he was her own son. I was truly changed and humbled by her kindness.

After lots of testing Mac was diagnosed with mild Autism Spectrum Disorder and a rare genetic disorder called proximal 10q duplication syndrome. Most days his diagnoses don’t even cross my mind. In fact, I had to go back through old paper work to even remember the name of his particular genetic disorder. It is not who he is. Instead, it just serves as information that guides us to help Mac be the best he can be.

Mac must work harder to learn skills that come naturally to most children his age. He gets there, but in his own time and we celebrate each hard-earned accomplishment. He spent the last 4 years attending Hope Academy a part of the non-profit organization Project Hope that serves children with autism. He was in a school setting half of the day and received ABA therapy for the second half. We are so very grateful for this special place and the amazing therapists and teachers that serve these precious children. Mac thrived while attending Hope Academy and it was amazing to watch.

Mac is very smart in many ways. I often say he is wise beyond his years. I always tell him that everyone is smart in different ways and we all learn differently. He doesn’t see himself as any different than any other child, and in most ways he is not. He has a light about him and brings joy were ever he goes. I don’t want this to ever change for Mac or any other child and that is why I think KIND and their mission is so important.

Educating and teaching children that we all have differences is necessary. All children have wonderful unique gifts to share with the world because of their differences. Our children need to learn that despite these differences, deep down we all long to be accepted for who we are, and we all deserve to be treated with kindness. This is certainly the greatest work we can ever do as parents.