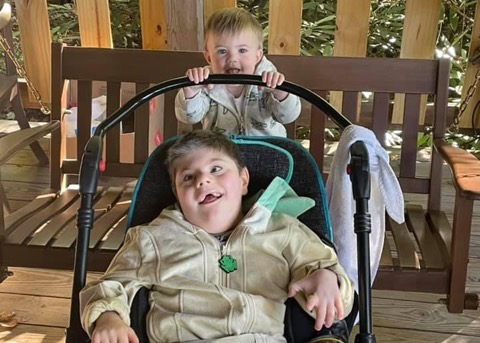 Logan was born in August 2014, at just 24 weeks gestation, weighing 1 pound 5 ounces at birth. He was an identical twin, and unfortunately, during pregnancy, mom developed a condition called Twin to Twin Transfusion Syndrome. When this occurs with twins, one twin receives the majority of the blood flow from the placenta, and the other twin does not receive enough. Logan’s brother, Luke, passed away, and Logan was delivered emergently and began his journey in the Neonatal ICU. He spent over 7 months in the NICU, had multiple bowel surgeries, and several eye surgeries. We watched him slowly gain weight, and were in awe of how strong he was! He has loved to cuddle from the beginning!

He overcame many obstacles in the first years of his life. He has severe retinopathy of prematurity (ROP), and is considered legally blind, and also has mild hearing loss. He is significantly delayed developmentally, and is wheelchair bound. But, he always wins at musical chairs! He is fed via feeding tube, but can take a few bites of ice cream. His favorite is Superman ice cream, of course!

He has a rare genetic condition, known at SETD5 change mutation. He is non-verbal, but has a special way to communicate with his family. He loves music, and will let us know if he does not like a song! He was born with heart problems due to being so premature, but these have resolved. He came home from the hospital on oxygen, but he was not happy about it, so he proved to us all again how strong he was without it!

Today, he is a happy 7 year old! He attends school, participates in physical, occupational, speech and vision therapies weekly, and is working very hard to walk in a gait trainer. He is also a big brother now to baby Henry. His older sister, Ella, is very protective of him. His smile is one you will not forget!