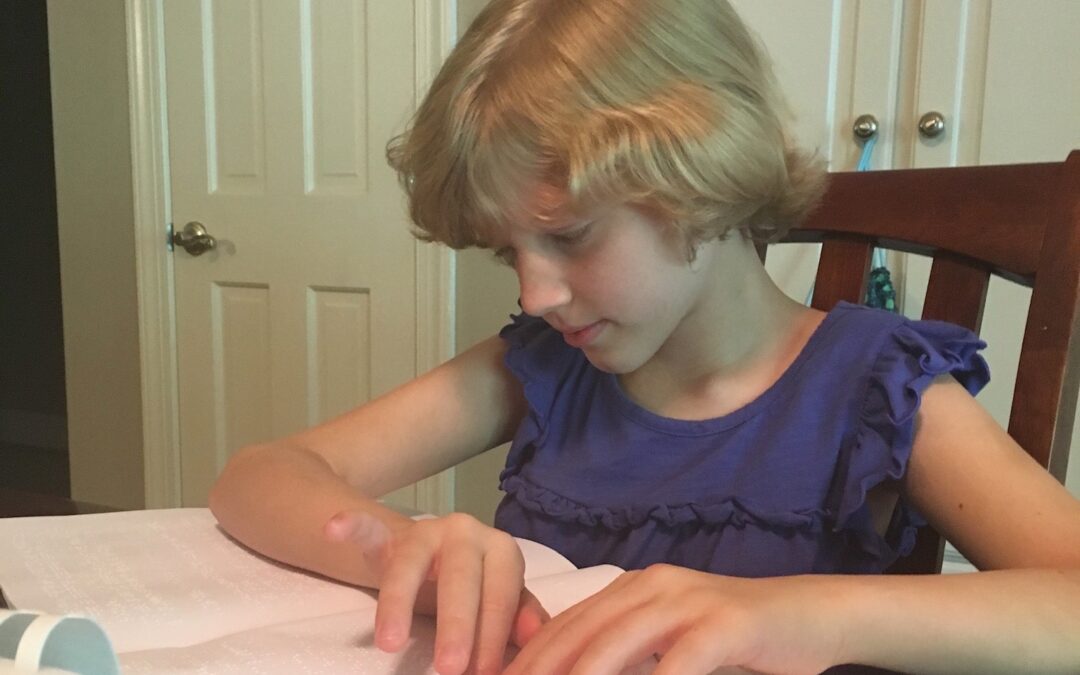 Lauren is the youngest of four children, so by the time we had her, we kind of thought we knew what we were doing. We did not, and she rocked our world for the better. She was a very pleasant baby, and we didn’t notice anything out of the ordinary except for some mild nystagmus. At her two-month check-up, I commented to her pediatrician that she wasn’t tracking anything. He was not only our pediatrician but also a friend. He looked her over and said, “Sure she is. I’m sure everything is fine.” At the four-month check-up, I brought it up again. I said, “Seriously, she isn’t tracking anything.” Our pediatrician then sent us to see a pediatric ophthalmologist. It was one of the worst days of my life. My sister went with me to the appointment. After the doctor had examined Lauren for a while, she wasn’t saying much, so I asked, “Can you tell what’s going on?” She proceeded to say that Lauren’s optic nerves were severely underdeveloped, she was blind, and there was nothing we could do to correct it – no corrective lenses, no surgery, nothing. It was a lot to take in even for a seasoned mother. Along with the vision loss, we also discovered that Lauren had other issues related to the underdeveloped optic nerves. Her pituitary does not tell her other endocrine glands to release the hormones they should. Consequently, she is on several medications including a nightly injection of growth hormone. We are thankful that her hormone issues can be controlled with medications.

One of my sisters-in-law sent my husband and me an email shortly after Lauren’s diagnosis encouraging us to allow ourselves to grieve the loss of the family we had imagined. It was some of the best advice we got at the time. We thought our grief was only for the loss of Lauren’s vision, but it also meant the loss of the “perfect” family we had envisioned. Our other three children embraced and loved Lauren well. We never should’ve been so concerned about the effects of Lauren’s vision loss on our family. She fit right in and taught all of us that there is so much more to seeing than what we see with our eyes.

As Lauren got older, we contacted the South Carolina School for the Deaf and Blind which is only about two miles from our house. We saw that as a “God thing”. Lauren started pre-school there on her third birthday. She also received Occupational Therapy, Physical Therapy, and Orientation and Mobility training while at school. This was a great learning experience for us and allowed Lauren to interact with other blind children. Lauren stayed at SCSDB until she was ready for first grade. Another mom in Spartanburg District 7 (our amazing public school district) who had a blind daughter, contacted me to talk to me about mainstreaming Lauren. Her daughter had been in D-7 schools for several years, so she had lots of insight, and her daughter had basically paved the way for Lauren already. When Lauren was six, she started first grade at Jesse Boyd Elementary where the Teacher for Visually Impaired was housed. Her TVI and aid were absolutely amazing. With their help, she became a voracious Braille reader. She was also tested in third grade for the talented and gifted program offered through D-7 schools and qualified, allowing her to attend Odyssey classes for enrichment.

Lauren is fifteen now and attends Spartanburg High School; a large public high school with an enrollment of over 2000 students. She takes Honors classes and amazes me every single day. She navigates the halls and elevator independently, eats lunch with friends, and works very hard to maintain high grades. With the help of the South Carolina Commission for the Blind, she has acquired Braille devices, a talking graphing calculator, special headphones that allow her to listen to her computer screen reader and the teacher in the classroom simultaneously, and adaptive software for her computer. This technology allows her to complete her assignments and participate in class as well as her sighted peers.

In the summers, Lauren attends camps for students with visual impairments. This continues to allow her to meet and interact with other blind students. She loves summer camp more than anything and sending her to camp has really helped with her independence.

Lauren and I recently went to a resort that had a hot tub. We got in with another young man who was already in the hot tub. Daniel was very curious about Lauren and asked her questions about where she went to school and about her vision. She told him she went to Spartanburg High School and had no useable vision. She also told him that she had never seen, so she didn’t know any differently. He said it was the same for him, then, he raised his arm out of the water and told Lauren that his arm was missing from just below the elbow, and that he also had no legs. He was born that way. I commented that we have always told Lauren that everyone has challenges to live with, just some are more visible than others. Daniel agreed and said, “Yes, we all have our own journey.” As Daniel got out of the hot tub to put on his prosthetics, he said, “Lauren, good luck on your journey.”

Lauren’s journey is just beginning. She has a lot to offer this world. She is one of the most positive people I’ve ever met. She’s very smart, but more importantly, she is kind. We have faced challenges and fought many battles to acquire the things Lauren needs to be successful in school, but we truly believe that there are very few things in this world Lauren will not be able to accomplish if she sets her mind to it.