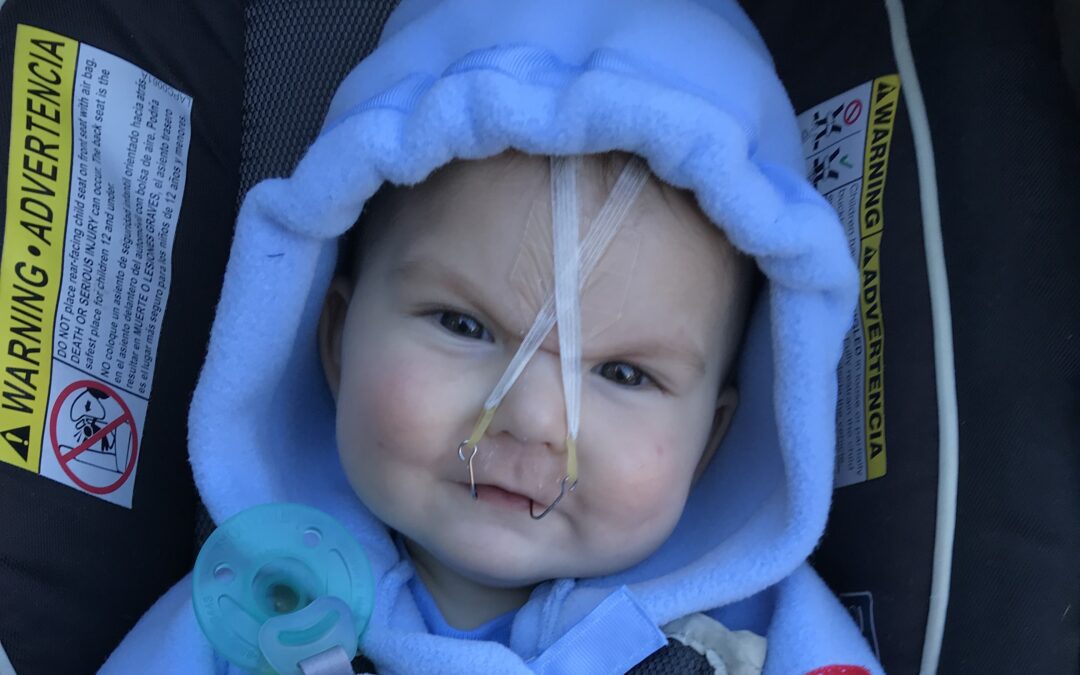 Meet the Cleveland Family and their son Jay.

When Jay was born, he was diagnosed with Pierre Robin Sequence (“PRS”).  PRS is a rare birth defect characterized by a recessed jaw, backward placement of the tongue and upper airway obstruction.  The underdeveloped jaw causes displacement of the tongue and formation of a cleft palate.  When Jay’s jaw didn’t fully develop in utero, this pushed his tongue upward and prevented the roof of his mouth from closing, which created a cleft palate. The position of the tongue can block the airway, making breathing difficult, especially when sleeping.  Feeding can also be difficult, because of the position of the tongue, small jaw, and cleft palate, which prevents the baby from being able to latch or create suction.

For Jay, this diagnosis meant a transfer to the NICU for monitoring and immediately switching to a prone sleeping position to keep his tongue forward and out of his airway. Also, because he could not create suction, he couldn’t breastfeed or feed from a traditional bottle and therefore needed to learn how to use a special bottle.  Thankfully, Jay was able to breathe on his own and sleep comfortably on his belly, although this was not ideal because of SIDS concerns.  He also was a hungry baby and figured the special bottle out quickly.  However, after meeting with an ENT, we learned that Jay’s jaw was 12 millimeters recessed, which is considered a major recession, and his jaw would not likely experience catch up growth naturally.  Also, a sleep study revealed that he had severe sleep apnea.  His tongue was obstructing his airway and needed to be moved forward to open his airway.

After learning more about surgical jaw distraction and meeting with doctors locally, we decided on a relatively new treatment for PRS. A craniofacial orthodontist at Stanford Children’s Health is using a non-surgical orthodontic airway plate (“OAP”) to treat babies with PRS. At the time, this was the only hospital in the United States that was using this treatment option. The OAP is fitted into the roof of the mouth like a retainer. Wires over the lips, denture cream, and medical tape across the face secure the OAP in place. A plastic “tail” attached to the upper plate extends into the throat.  The tail keeps the baby’s tongue from falling backward and obstructing the airway. The plate not only holds the tongue in a safe position, keeping the airway open, but also stimulates the lower jaw to grow forward. As the jaw grows forward, the airway opens naturally. Repeated sleep studies are used to determine effectiveness of the OAP.  The OAP is worn all the times, but is taken out each day for a few minutes to clean it and reapply denture cream to hold the OAP in place.

For Jay to be fitted with the OAP we traveled to Stanford in late August 2021 for 18 days.  Jay turned 3 months while we were there and this week is the anniversary of that trip. The placement of the OAP is an inpatient procedure, and Jay spent 9 days in the hospital at Stanford.  After he was discharged, he had another 9 days of outpatient appointments.  We returned to Stanford for a week each month for the next five months to have the plate refitted and the tail adjusted to further stimulate jaw growth.  Each adjustment brought some temporary discomfort for Jay, but he was a champ through it all. After five months, the OAP advanced Jay’s jaw forward and his sleep apnea improved from severe to mild. While in Palo Alto, we were blessed by the hospitality of the Ronald McDonald House. It was able to house us for each of our visits and we will be forever thankful for our home away from home.

In June, Jay had surgery to repair his cleft palate. After a two-week recovery and wearing his “no-no” arm bands to keep his hands out of his mouth, Jay is doing great. He is able to drink from a standard sippy cup— such a big milestone!  In the months and years ahead, he will have regular appointments with speech and occupational therapy to help with speech delays associated with a cleft palate.  He will also have regular sleep studies to make sure his sleep apnea improves.

Today, Jay is a happy, laid back toddler that loves his sisters. We are grateful to have this opportunity to share Jay’s story and for organizations like KIND. This Monday, September 5 is Pierre Robin Sequence Awareness Day.  On this day especially, we will be praying for all families and children on their PRS journeys. We are thankful for the doctors, nurses and therapists that have made such an impact on Jay and our lives.  As members of the PRS community say, “keep your chin up.”