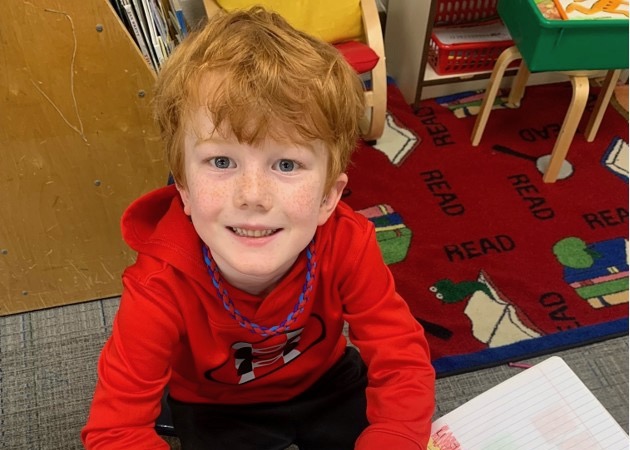 Our Jack was born 10 days early in November 2015.  He came into the world pretty quickly for a first-born child.  Nevertheless, he was healthy as far as we could tell.  On the first full day in the hospital, his hearing screen was performed.  He failed on his right ear twice. They assured us it was likely due to amniotic fluid in his ear canal, and we shouldn’t be too worried. We were then referred to an ENT to be seen six weeks later.  At that appointment we were told that Jack passed that hearing screen and we had nothing to worry about.

Fast forward to his 3rd birthday…  Over the several months prior to his 3rd birthday, my husband and I has some very minor concerns about Jack.  His speech was not as developed as others his age, but it never occurred to us that this had anything to do with his hearing.  Then, we noticed that when we were driving in the car he would always ask us to turn so he could see our mouth when we spoke to him.  In addition, his 3K teacher asked us if we had ever had his hearing checked. All of this caught us a little off guard initially. At his 3 year well check, Jack’s pediatrician performed a routine hearing screen in both of his ears. The results of this were either PASS or REFER.  Refer meant to refer to an ENT, Pass meant all was well. Jack scored refer on each ear. So, we went back to the same ENT we had gone to when Jack was born.  The initial diagnosis was that Jack had pressure in his ears and needed tubes.  While doing that procedure though, they would also do an ABR, Auditory Brain Response, test. This test would tell us how the inner ear, called the cochlea, and the brain pathways for hearing were working.  According to those physicians, he passed that test as well, meaning his hearing was not atypical. Over the course of the next several months, Jack underwent numerous tests, including tests in a hearing booth, another ABR, all to no real conclusion. My husband and I decided that we needed to get a second opinion.  We made an appointment at MUSC with a well-respected pediatric ENT.  We were immediately greeted with several professionals who wanted to see Jack to help us get to the bottom of the issue. We saw a speech therapist, an audiologist, along with the ENT. We went back several times over the next couple of weeks. I will never forget the appointment where the audiologist told me that she suspected it was progressive hearing loss. He had profound hearing loss in his right ear, meaning he couldn’t hear anything in that ear.  His left was slightly better, his loss was moderate to severe.  This meant he did still have some natural hearing in that ear. All this time, Jack, being incredibly resourceful, had relied on reading lips to supplement what he couldn’t hear and did so very well. The next step was an MRI to see if there was anything going on in his inner ear to cause the hearing loss.  After this procedure, the ENT spent a lot of time with telling us that Jack’s ear looked normal and that the best course of action if we wanted him to hear would be a cochlear implant.  This would of course require surgery.  It was a very difficult pill to swallow knowing our son would eventually lose all natural hearing.  After prayerful consideration, we decided to have Jack implanted with his first cochlear implant just shy of his 4th birthday.  His “ear” as we call it, was activated 3 weeks later.  It was an emotional day but a very memorable day as well.  Jack would have a cochlear implant in his right ear and a hearing aid in his left ear.

Jack’s initial surgery was in November 2019.  We relocated in January 2020 and enrolled Jack in a preschool for the deaf and hard of hearing (DHH), knowing that this environment would be the best for him to learn as much as possible with his new devices.  We got him set up with an excellent speech therapist and we were on the right track to ensure that Jack would succeed.  Then the COVID-19 pandemic began.  We figured out how to do some of these things virtually but they are definitely not as easy when you are hearing impaired.  Nevertheless, we figured it out- we worked a lot at home with speech and language and Jack began to really thrive.  His language improved, his interactions with others improved, along with his confidence.

Since then, Jack started kindergarten at a public school in a mainstream classroom with the assistance of a DHH teacher, a speech therapist, and other accommodations that his amazing teachers so graciously incorporate.  In November of 2021, Jack had his second cochlear implant surgery and is now bi-laterally implanted.

Jack plays baseball, basketball, performs in school productions, all things that we just didn’t know if he would be able to do when he was diagnosed with hearing loss. If there is one thing that I have learned throughout all this it’s that our kids are magnificent, resilient beings.  Jack makes me proud to be his mother every day with his positivity, his eagerness to learn, and just his funny sweet way of being. To quote a huge hearing loss advocate whose guidance has helped me so much, @MyBattleCall, “Children with hearing loss will rise to the bar set… reach for the stars!” And that is exactly what we plan to do.