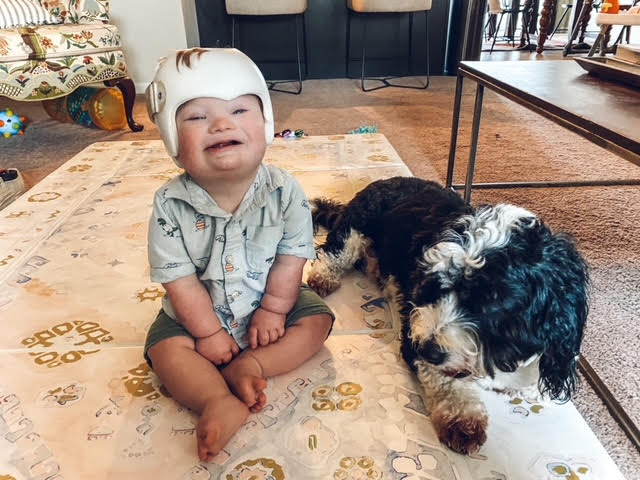 My pregnancy with Jack was fairly uneventful, as was my short labor followed by a few minor complications with delivery. We were quite surprised when the doctor came in and asked us if we were familiar with Trisomy 21.  It only took a few days for testing to confirm that Jack did indeed have Down Syndrome.  We certainly felt nervous and anxious about the unknowns of the future, but we never experienced a time of deep sadness. In the midst of the unknowns I felt an unexplainable peace and trust in God’s sovereignty.
God began writing Jack’s story long before his arrival. I’m not exactly sure when, but at some point I began to feel a nudge towards the possibility of adopting a baby one day who had Down Syndrome. I shared that possibility with some of our close family and friends over time in various conversations. One of our friends even let us know after an adoption conversation that she has, “dreams that come true sometimes,” and had recently had a dream that Ben and I have a baby with Down Syndrome one day. This was well before we were pregnant. I’m not sure if I would have ever been brave enough to pursue that adoption, although I would like to think so and maybe it still is in our future. However, now I see how all of those feelings and conversations were preparing me for the news of Jack’s diagnosis.
When Jack was around two-months-old, he was also given a diagnosis of Craniosynostosis. It is extremely uncommon for babies with Down Syndrome to also be given this diagnosis. Jack had his first surgery when he was three-months-old. A cranial spring was inserted endoscopically and was removed three months later followed by helmet therapy.  He should be finished with his helmet therapy soon and hopefully not have future concerns regarding this diagnosis.
Jack was set up with an early interventionist, who happened to be a friend of ours, during his first few weeks of life. Over the past year, he began physical, occupational and speech therapy. While he does have some developmental delays, Jack has surpassed many expectations regarding his development.  He has taken “swim lessons,” at the YMCA and participated in Kindermusik classes. Both of which were very supportive and inclusive environments.  This year he began school at The Meyer Center, and has loved it so far!
We have met the most amazing families and new friends over the past year. I feel incredibly encouraged by this great community and thankful for organizations like Kind of the Upstate who are paving the way for a more inclusive life for Jack. We have high hopes for his life not to be defined by Down Syndrome, and also hope that these stories shared will help prepare parents in the future who will receive unexpected news/diagnoses’ for their children. It is scary, but it doesn’t have to feel daunting.
We fall more in love with our Jack every day. His laid back demeanor, affectionate snuggles, and tiny one tooth grin melt us over and over again. He has been the sweetest blessing and we can’t imagine life without him. While we still have much to learn and I’m sure difficult times ahead, we are confident and hopeful that Jack’s life will be used to bring God glory and shine Christ’s light in a world that can sometimes feel so dark.
*Please note that I’m happy to answer any questions about Down Syndrome or Craniosynostosis for anyone reading our story walking a similar road.