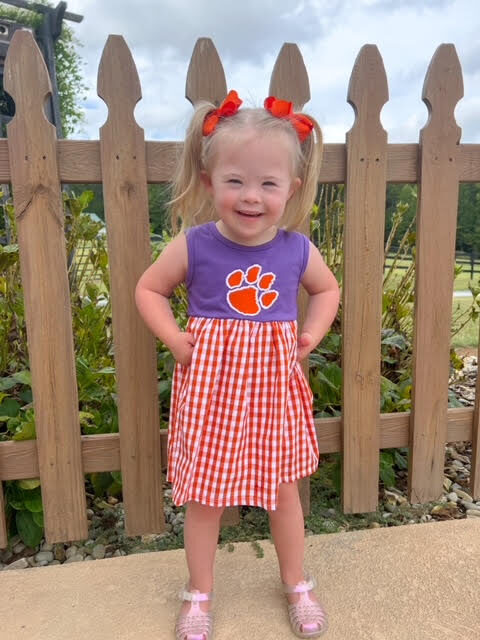 This is the story of Harleigh Ann Catto and her ups of Down syndrome.  Her story starts with doom and gloom, as for the end of the story, it is still full of endless possibilities.

From the time Jason and I realized we were expecting a precious child we were elated!  We had been married for eighteen years.  We had so many plans as a newly, young married couple.  We traveled and enjoyed life for many years.  After being married for around five years, we began to yearn for a child.  We prayed and our prayers were not answered in our timing.  At thirteen years of marriage, we decided to turn to fertility specialists, something I never thought I would do.  This process began with blood testing, ultrasounds, medications, and then led to injections.  After our first intrauterine insemination was unsuccessful, we decided to move forward with In-vitro fertilization.  We counseled with the specialists and thought this was our only way to become parents.  After some deep soul searching, we decided against In-vitro and moved on with our lives, us both understanding that we may never be parents.  We had many nieces and nephews to love and spend time with so I prayed for contentment in that.

This entire time of infertility, I never felt as if I could talk to family or friends about the subject.  I never knew of anyone who had been through infertility and it was so hard to open up all the feelings that it brought. I wish this had been different.  I wish I had reached out to deal with all the emotions and worked through it as time passed.  I held it all in, only confiding in my husband, and honestly, I didn’t think he understood or felt the way I did as a woman who would never be a mother.  This was a very lonely time in my life.

In December of 2017, I began feeling symptoms of pregnancy.  I was 39 years old and thought I was probably beginning menopause.  Much to my surprise, I was expecting!  I was only six weeks pregnant when we had the first positive pregnancy test at home.  Jason was so excited that he wanted to tell the entire world!  I, on the other hand, was in shock.  After yearning for a child of my own for so long, it was finally happening.  Because I am a nurse, and knew many things could go wrong in the first trimester of pregnancy, I did not want to tell a soul that we were pregnant until I saw it with my own eyes on ultrasound.  Jason, on the other hand, was dying to tell our parents.  We agreed we would tell ONLY our parents and swear them to secrecy until we had the first ultrasound to confirm we were indeed pregnant.  I had my first obstetrical visit at 8 weeks of pregnancy and all seemed to be just fine.

It was on the day of my twelve week ultrasound that the wind was taken out of my lungs…you see, I had waited 39 years to become a mom and had been married 18 years.  We had tried to become pregnant over about twelve years and had many failed fertility treatments, never becoming pregnant.  On the day of my first ultrasound, I knew something was wrong before the physician even told us.  After the ultrasound tech had completed the ultrasound, she sat us in a waiting area to talk to the physician.  I felt impending doom.  I knew in my heart something was not normal.  When the physician finally called us in, she told us there was a cystic hygroma on the baby’s neck.  This could mean a lot of things, but the main concern was a genetic disorder.  I had so many questions. Would the baby live?  I was excited and devastated all at the same time.  From here, we were scheduled for genetic testing.  The story just gets worse from here.

A week or so went by and we received a call from genetics.  At thirteen weeks gestation, we found out that our baby was a GIRL…and that she most likely had Down syndrome.  At this point, I was elated!  Why, you may ask.  Well, because of all the genetic disorders that were shown to us a week earlier, Down syndrome was actually one of the disorders I knew about and it seemed to be the least horrific of all of them.  You see, I was a nurse in pediatric intensive care and had cared for a few children with Down syndrome in my career.  I had some knowledge of the diagnosis and felt confident that I could raise this child with great success.

Next, we met with our physician.  Because I was considered Advanced Maternal Age at 39 years old, we also were referred to high risk obstetrical physicians.  Here, we had the first mention of termination of pregnancy.  What???  After yearning for a child all of our married lives?  Many doctor visits came and went.  We were offered termination at almost all of them.  Physicians and even family told us they would support whatever decision was made.  For me, there was no decision to be made.  My exact words were, “If the Lord gave me this baby, He will give me the strength to care for her”.  That was just about the end of everyone feeling sorry for us!

I really tried to enjoy my pregnancy, knowing it would most likely be my only one due to my age. We had a few close family and friends who supported us with kind words and love during one of the most difficult times of our lives.  Many of our friends and family rallied around us to show love for us and our expected bundle of joy.  It seemed they already loved this child as much as we did.

Over the next 24 weeks of pregnancy, there were many doctor appointments and ultrasounds.  I will add here that our first ultrasound at the high risk OB office, the cystic hygroma could no longer be seen.  It seemed the hygroma had absorbed, which was great news.  An amniocentesis was recommended to diagnose Down syndrome, as the genetic testing was not a diagnosis.  I refused the amniocentesis from many reasons.  Being a nurse, I knew many risks of the amniocentesis, but most importantly, having an actual diagnosis would not change my decision of termination of the pregnancy.  An intrauterine echocardiogram was performed on our sweet girl’s little heart and all was considered normal.  The only soft marker that was found for Down syndrome during pregnancy was short femurs.  We took the information that was given to us, researched, read articles, and prayed.  Yes, we prayed that she would not have Down syndrome, but we prepared our hearts, none the less, in case she did.

The Day of Delivery, August 21st.  Labor and delivery was very quick for us.  I labored at home as long as I could, then made the drive in to the hospital.  We arrived at the hospital ready to deliver, as I had labored mostly at home.  Harleigh’s heart rate was low when they placed her on the fetal monitor and everyone jumped into action.  They had not even asked my name yet!  I was fully dilated and the fact that her heart rate was dropping with each contraction meant it was time to push. She was born within the next fifteen minutes.  I remember that moment as time stood still.  The most precious baby was put on my chest after delivery, but she was very grey in color.  They whisked her away to the infant warmer and suctioned her lungs so that we finally heard her first cry.  Of course, everyone in the room saw the signs of Down syndrome with a glance, but no one was speaking.  Once again, that cold and distant feeling.  I just wish someone would have said something!  Of course, there were concerns of heart defects and oxygen saturation knowing she had Down syndrome so the NICU intensivist was called to assess Harleigh.  The decision was made that she was safe to stay in the room with us!  My baby was healthy and that is all that mattered to me.

The next day, the physician on call from our pediatrician’s office came to round on our sweet girl.  She sat next to me on the bed and asked what we had been told during pregnancy regarding the probable diagnosis of Down syndrome.  We explained to her all the happenings of the pregnancy and that we refused the amniocentesis for diagnosis.  We informed her that it didn’t matter to us what her diagnosis was.  We would love her just the same as any child.

There were many doctor visits.  Within the first few months of life, we saw genetics, cardiology, ophthalmology, hematology, and her regular pediatrician.  Harleigh was a very healthy, full term baby. The geneticist diagnosed Harleigh with Down syndrome after blood work showed the extra chromosome, but Harleigh was an exception to the rule.  She did not have the typical hypotonia that normally comes along with the diagnosis.  Her features are not as pronounced as some children.  She doesn’t even have a fat pad on the nap of the neck, which is partly what they feared when the cystic hygroma was seen on ultrasound.  Her only health concern was three small atrial septal defects in her little heart.  We had the best cardiologist who said, “We will wait and see if the Lord closes them and if not, we will close them before she starts kindergarten”.  Oh the joy in those words.  That meant no impending Cardiac surgery at this point.

Our plan was to raise Harleigh the way we would have raised a neurotypical child, pushing her to be the best she could be.  We began to incorporate early intervention, who eventually recommended occupational, physical, and speech therapies which all began by the time Harleigh was one year old.  Harleigh is now three years old.  A follow up with cardiology showed that all three atrial septal defects have closed!  At this point, we face no surgeries and are so very thankful for that.  She is enrolled and attending a K3 program in our district and thriving.  Harleigh is walking, talking, singing, knows her alphabet, and is learning to write her name.  She is doing all the things a typical toddler does.  We continue all the therapies as we believe the more we support her in the early years, the better outcome she will have.

Our overall experience with Down syndrome has been a blessing thus far.  Harleigh brightens the day of anyone she meets and is loved by everyone we know.  We are involved in our local Down syndrome chapter and have connected with many families in our community who also have children with Down syndrome.  We find comfort in seeing other children thriving and have high hopes that Harleigh will attend elementary school in an inclusive, main stream classroom.  Receiving the diagnosis of Down syndrome for our sweet girl was not the end of our world, it was only the beginning.