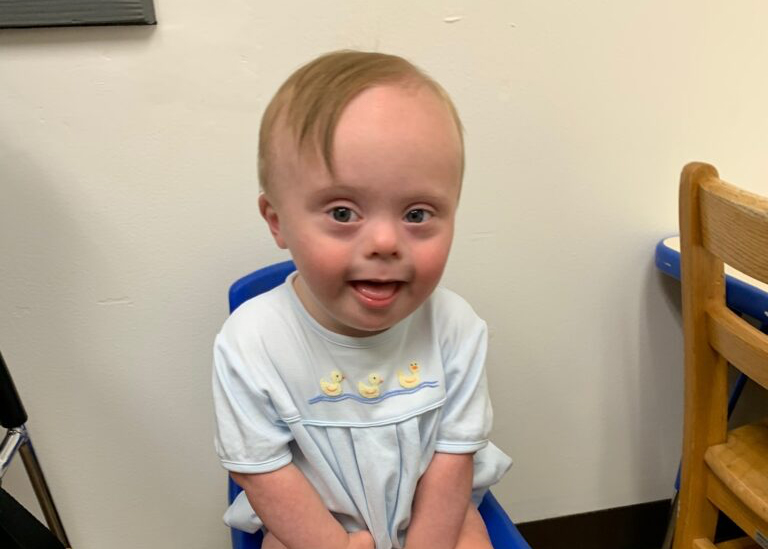 I had a very uneventful pregnancy until my 33 week appointment. I will never forget that day.

At my 33 week appointment, the sonographer stopped midway through and said, “I have to step out. I’ll be right back.” I remember looking at my husband and crying. I knew then that something was wrong with the image she visualized. A few minutes later, one of the doctors came back in and told us that baby A had a stomach issue known as Duodenal Atresia. He told us that Duodenal Atresia was linked to Down Syndrome, but since we had gone through genetic screening earlier in our pregnancy and nothing abnormal had been noted on any ultrasound before, he gave us a 1% chance of our baby A having Down Syndrome. At that moment, my head was spinning and I was trying to gather my thoughts.  We understood at that point that our child would need serious surgery shortly after he was born and there were so many other unknowns.

I left that appointment feeling like my world was collapsing, and I was not sure how I would endure the next few weeks of pregnancy. The doctor suggested that I go out on modified bedrest, and the next four weeks were truly the worst four weeks of my life…..The waiting, the agonizing, the unknowns, and the many questions I had, it was too much to handle. I went to sleep at night crying and I woke up crying. If only I could go back and tell that worried mom what I know now…..

At 37 weeks, I had a planned c section. It should have been one of the happiest days of my life because welcoming a baby, albeit two babies should be exciting.  However, I was so anxious and nervous because I had no idea what to expect with our Baby A named Hall. Did he have other issues that hadn’t been detected via ultrasound? Did he have Down Syndrome? Would he survive major stomach surgery? It was too much to even process at the time.

Baby A, Hall, arrived at 8:04 am and Baby B, Barrett, arrived at 8:06 am. We saw Hall first and I knew immediately when I saw him, that he had Down Syndrome. He was beautiful, but it was bittersweet to see him because I also realized at that moment that our lives were forever changed. Barrett came shortly after and when I saw him, it was even more obvious that Hall did look different from his brother.

Hall was taken to the NICU moments after he was born where it was determined that he did in fact have Down Syndrome. I remember hearing the words “your son has Down Syndrome” and thinking I was dreaming. That this entire experience was all a dream and shortly I would wake up to find out it wasn’t true.

The day after Hall was born, he was taken to surgery for a Duodenal Atresia repair. A newborn baby going to the OR for a huge surgery was overwhelmingly frightening. However, Hall did excellent and recovered well. A few weeks after his first surgery, he was diagnosed with Hirschsprung’s Disease.  This required an additional surgery, where the doctors removed part of his intestines and rejoined the parts that were functioning correctly.  He also recovered from that surgery like a champion. He stayed in the NICU for 7 weeks and continued to thrive while he was there. The nurses and doctors loved him. How could they not? He was adorable and so sweet. I remember one of the nurses telling me, “oh that Mr. Todd, he just likes to be held and snuggled.” It was true. He loved to be held and to snuggle with his amazing team of nurses.

He still loves to be held and loves to hear his parents sing. He loves music and loves to clap along while I sing his favorite song, “If You’re Happy & You Know It.” He loves to smile and thoroughly enjoys playing outside. He is very much like his brother in a multitude of ways. They are certainly more alike than different.

When I look at Hall, I no longer see a baby with Down Syndrome like I did when he was first born. When I look at Hall, I see a toddler first and foremost. The Down syndrome features and characteristics are not apparent to me now. Down Syndrome does not define my precious boy. As his mother, all I see is a beautiful boy who might need a little extra encouragement to meet his milestones, and he will meet all the milestones in his own time.

There is so much beauty to be found in parenting and having children whether they have a difficult diagnosis or not. I wish I could go back and tell myself this in those early days when I was so sad and angry about having a child with Down Syndrome. A friend recently shared a quote that resonated with me, “I wouldn’t change you for the world, but I will change the world for you.” I cannot imagine my world without Hall or Barrett. They are perfectly made and a wonderful duo. We are blessed beyond measure, and I cannot wait to watch their relationship unfold.

During this whole process, I needed a support network, who had already been through a similar experience.  I bonded with my friend and co-founder, Caroline Giguere, over our discussions regarding our kids with special abilities. Caroline was able to coach me through so many different appointments, therapies, and provided tons of tips. I will never forget her telling me to hang on and remind myself that it does get better and easier. A few months ago, we were talking about our extraordinary kids and the idea of educating others about our children came up in conversation. We felt that our community needed more education regarding kids with special abilities. Hence, the nonprofit KIND was born.