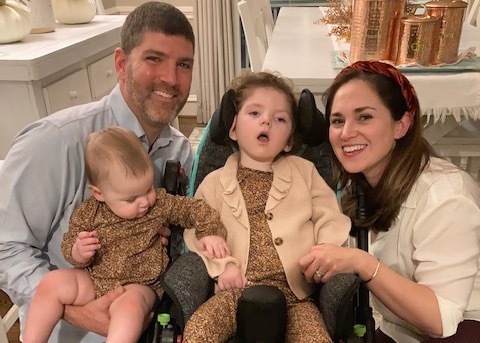 Edith Lawrence Terrell was born November 20, 2018.  Pregnancy, delivery and infancy was all wonderful and normal but at 4 and a half months everything changed, and our lives were turned upside down within a week.  Monday morning, April 8, 2019, we were getting ready for work and noticed Edie was twitching in a very noticeable and unusual way.  After sending a video to our pediatrician, we were told to come in for an appointment immediately.  Our pediatrician broke the heartbreaking news that our daughter was most likely having seizures (infantile spasms) and referred us to a neurologist.  We saw the neurologist the next day and Edie had her first of many EEGs.  The pattern shown in the EEG was abnormal and we were sent to have an MRI that Friday.  Our neurologist called that afternoon and informed us our sweet baby girl has lissencephaly.  We had never heard of lissencephaly before, but after further conversation with our doctors, and independent research, we knew Edie’s life would be anything but typical or easy.

Lissencephaly literally means “smooth brain” and is a rare genetic brain malformation characterized by the absence of natural folds in the cerebral cortex.  Symptoms include, difficulty feeding and swallowing, failure to thrive and seizures.

Edie began therapy (EI, PT and OT) through BabyNet immediately after her diagnosis and although she was behind developmentally, she still made slow but steady progress during her first year.  Unfortunately, around 15 months her seizure activity severely increased.  In March of 2020 she was hospitalized due to aspiration and received her g tube.  Less than a month later she was back in the hospital due to increased seizure activity and was put on the keto diet.  After a terribly challenging year we introduced CBD into Edie’s treatment plan and began to see improvement.  After adding CBD into the arsenal, in addition to the keto diet and multiple seizure medications, her seizures went from up to two dozen a day to only 2-4 a day.

Now at age 3, Edie has endured multiple hospitalizations, daily seizure activity, and challenges most won’t know in a lifetime, but she continues to be the sweetest, most inspirational person we’ve ever met.  She has strength we never knew possible and has irrevocably changed her entire family.  Edie loves being outside, cuddling, her devoted therapists, balloons, and her little sister (most of the time).  The support we’ve received from friends, family, Edie’s amazing team of doctors, and therapists who have become part of our family, are the only way we’ve made it this far in our journey.  Through all the struggles, we feel the luckiest to be chosen as this angel’s parents and are thankful every day.