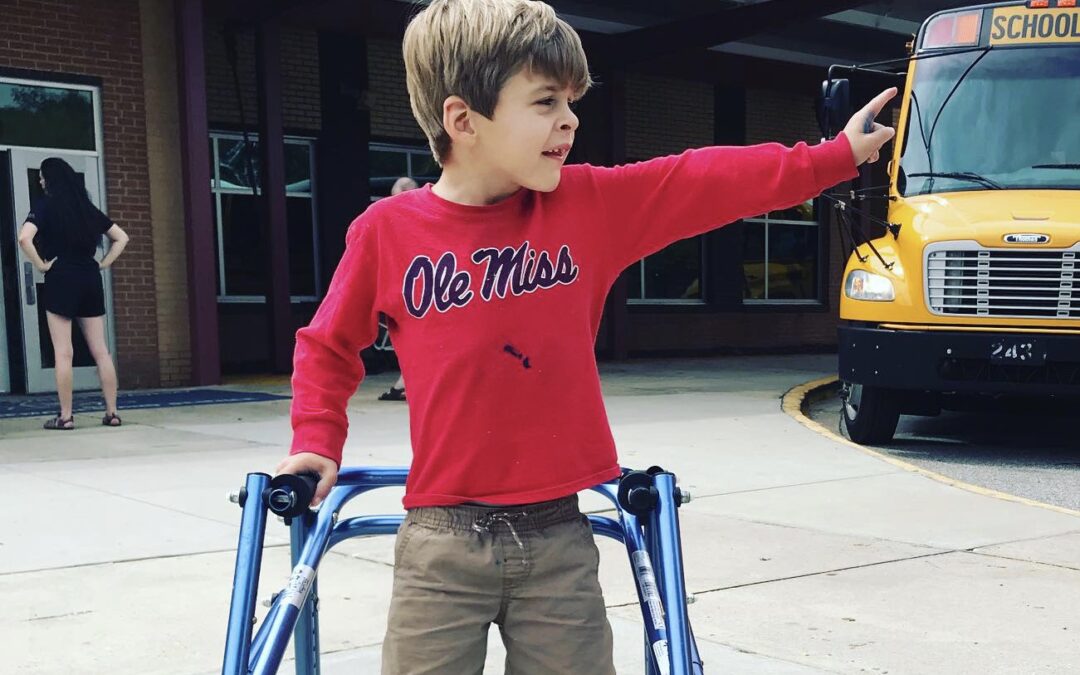 In Duncan’s five years of life, we have seen time and again that our God is a God of miracles. When Duncan was diagnosed with polymicrogyria (literally the lumps in his brain are too small, aka micro), the physicians couldn’t tell us if he would ever walk or talk or what quality of life he would have. Our seemingly healthy baby boy had gone from a normal newborn screening to medically complex in just a few short weeks when he started having seizures at four months old. I remember being in the hospital and being so confused by the term “developmental delay.” I’d never heard it before and was scared to ask exactly what it meant. We spent a week in the hospital while doctors monitored Duncan’s epilepsy and tried to control them through medications. At the time, my husband, Ryan, was a second year medicine and pediatrics resident so many of the doctors and nurses taking care of us were his colleagues. The best advice I got in the hospital was from a nurse who told me to make sure I understood what the doctors were saying – and not just let them speak in medical jargon to my husband. Our time in the hospital was so overwhelming and we were uncertain as to what our future would look like, but the time was also amazing in that we felt the love of our family, friends, and church family very deeply. We have seen the hand of God in Duncan’s little life from the very beginning and are confident that Duncan’s story will bring God glory.

When we got home, the real work began. We quickly signed up for Baby Net and started early intervention, physical therapy, and occupational therapy right away. A few months later we added feeding therapy, which involved eating lunch at Kidnetics three times a week. One of the things we quickly learned is that you can always ask for more therapy. By the time Duncan was a year old, we did three times a week physical therapy, twice a week occupational therapy and once a week speech therapy. Duncan started crawling on New Years Day 2018 when he was 18 months old. We were at the Haywood Mall play area with a friend because it was so cold, and he just took off. I started bawling. Then I FaceTimed Ryan who was at the hospital and he and everyone with him started crying too. It was the happiest day!

When Duncan was two years old we moved to St. Louis for two years for my husband to complete a fellowship in allergy and immunology. It was scary leaving our fabulous team of therapists and Dr. Bill Taft, his neurologist, who had been an excellent mentor to me and Ryan. But St. Louis turned out to offer some amazing opportunities for Duncan.

From the time he was a baby, I could tell Duncan loved animals – particularly horses (it also so happens his mom is a big horse fan). In South Carolina, the age to start equestrian therapy is four, but in St. Louis there was a program called Ride on St. Louis that would take students as young as two. I was ecstatic when Duncan got into the program shortly after we moved there. He immediately took to it and they ended up using his picture on all their materials including billboards around the city. We are so blessed that Duncan’s great-grandparents took it upon themselves to pay for this therapy for him. It’s ridiculously expensive and such a shame it’s not an option for all special needs kids, because we immediately began seeing a big difference in Duncan’s willingness and ability to use his gait trainer.

During our time in St. Louis, Duncan ended up having equestrian therapy at another place as well called Equine Assisted Therapy. When the pandemic started, we had to stop that therapy, which was disappointing because it had been very helpful. When we moved back to Greenville, finding a place for him to ride was top of our list. We found Let’s Saddle Up in Fountain Inn and they have been wonderful. He’s done three eight-week sessions with them over the past year. And has absolutely loved riding Scooby. Currently, Duncan is giving swimming at the YMCA a try but we have plans for more riding in the near future.

As a parent of a special needs child, it seems so scary to think of them “aging out” of Baby Net. When Duncan turned three, he and his big sister Caroline were able to spend a year of preschool at the Kirkwood Early Childhood Center. We didn’t know it when we chose to live in Kirkwood, but KECC is one of the best special needs preschools in the country. Caroline, who is just seven months older, and Duncan were able to be in the same class, which was a special opportunity for both of them. During the school year Duncan learned to use an augmentative communication device (his is an iPad with the program Proloquo2go). He also took his first independent steps there in physical therapy! Everyone on the hall cried happy tears when his PT told me at pick up time! Of course as luck would have it, the next week was Spring Break and then because of the pandemic we never went back.

When we were looking at school options in Greenville, we were torn as to what option to pick, and it was especially hard to choose because we couldn’t tour the schools due to the pandemic. Ultimately, we decided to try the public preschool, and Duncan attended Overbrook Childhood Development Center last year for 4K. It was such a blessing! We absolutely loved his teachers, therapists and the entire school staff. This year he is in Kindergarten at East North Street Academy, and, once again, we’ve been thrilled with his progress. He particularly loves having class pets! It was important to us to be able to keep our outside therapies going because we’ve built such an amazing team with Becky (PT) and Michelle (OT) at Sunshine Therapies and Josie Henry at Wordplay for speech. We also had the best early interventionist, Lizzie Forbus with Bright Start, and are so sad he aged out of her caseload when he turned five. Becky and Lizzie started working with Duncan when he was just six months old so they know him inside and out! Currently, Duncan does most of his therapies at home at 8 a.m. and then goes to school at 9 a.m. He also gets PT, OT and speech at school. This summer he started swimming lessons at the Caine-Halter YMCA through a special needs grant. After the initial grant ran out, we signed him up for weekly lessons and it’s something fun he and his big sister can do together.

Our church, First Presbyterian Church of Greenville, has also been a great resource for us, especially because of its wonderful special needs ministry. Duncan has a “buddy” each week at Sunday School so he can be with his peers. He was also able to attend VBS this summer for the first time and LOVED it – especially the music. We listened to the CD until it quit working! A few weeks ago, he was in the Fearfully and Wonderfully Made Fashion Show that was organized by Michelle Ward and held at First Pres. It was such a positive experience for both of us!

I’m also so thankful that we live in America in the time that we do. There’s a lot wrong with American politics and healthcare, but special needs children are taken care of in so many ways that just doesn’t happen in other parts of the world. All of Duncan’s therapies (except the extras like horseback riding and swimming) are covered by TEFRA, along with his medicines (one of which costs $1,300 for a 30-day supply). His walker and orthopedic braces are also covered. I am grateful that our country provides these resources to our family and to others like ours.

We’ve learned so much through this journey with Duncan. And while we’ve had to grieve the future we thought he’d have, we are excited to watch him grow and see what God will do in his life. His story has already reached families around the country and world who have a PMG diagnosis, and I regularly hear from other moms about how following Duncan’s journey on Instagram (#littlemanduncan) has encouraged them with their children. I am certain that Duncan will have a lasting impact on countless others throughout the course of his life.