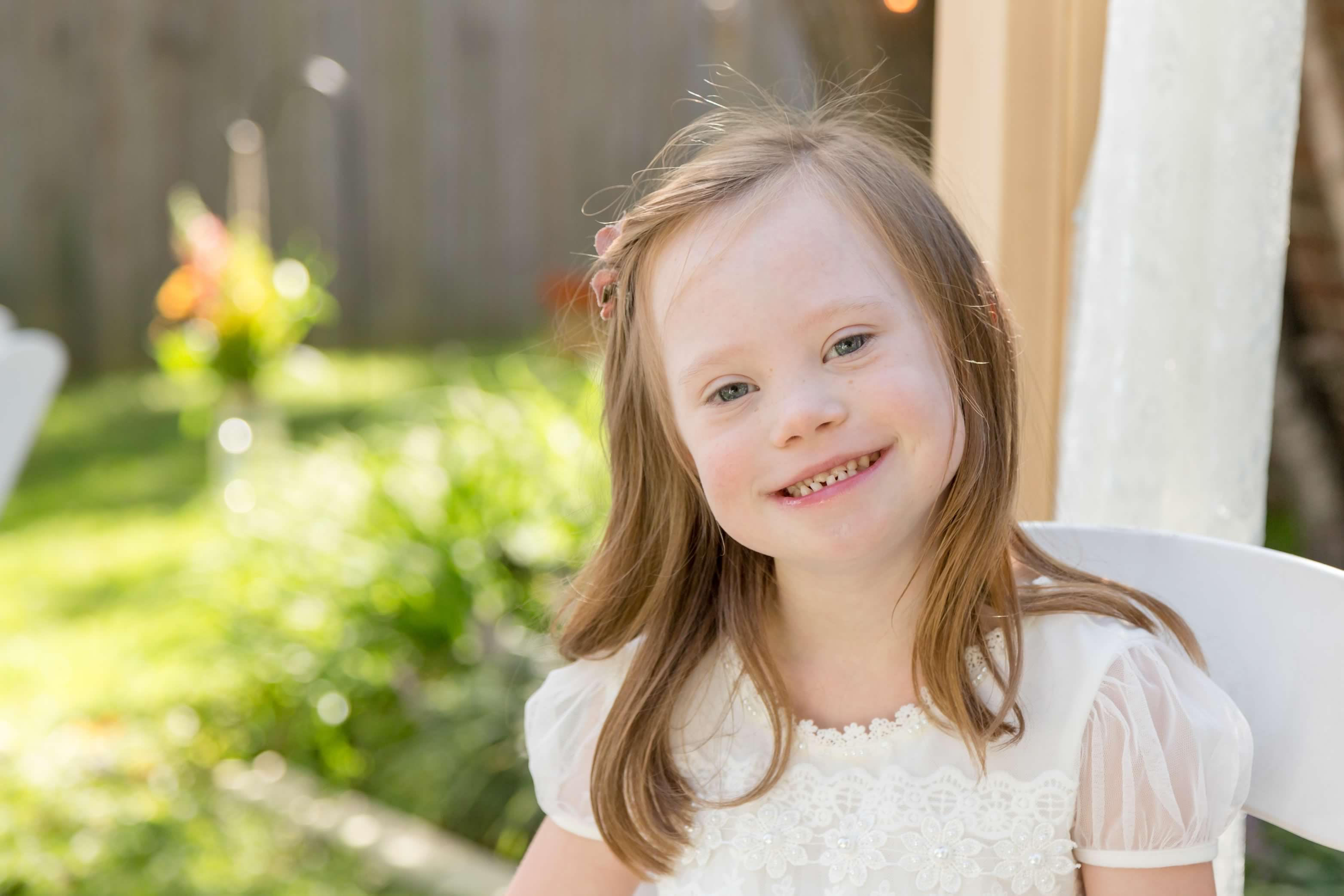 Meet the Johnson family and their daughter Delaney

I was thirty years old when I gave birth to Delaney. During my pregnancy, we had a positive result on the early blood test that could indicate Down syndrome. Because of this, I had to see a specialist every couple of weeks for ultrasounds. The doctor quickly let me know that false positives are very common and offered an amniocentesis to rule out Down syndrome, which I declined. Initially they saw fluid on her kidneys, which can be a soft marker for Down syndrome, but that was the only marker they found. With each passing appointment, the fluid decreased, and the words “Down syndrome” were not mentioned anymore. At 38 weeks pregnant, the doctor became concerned that the baby was not growing, and he sent me to the hospital to be induced the next day. In less than an hour from the start of the induction, I gave birth to a baby girl. I knew as soon as I saw her that she had Down syndrome. I looked around the room for confirmation from others that they saw the same. No one would look me in the eyes. After spending several minutes inspecting Delaney, the doctor shared the probable diagnosis of Down syndrome. We were then left alone to process this information and share our surprise news with family and friends. A few hours later, Delaney’s oxygen levels began to drop and she was taken to the NICU. She would stay there for two weeks, and then come home on supplemental oxygen for another few months. The first few years were a whirlwind of doctors and therapy appointments, including several instances requiring a return to oxygen support. At almost three years old, Delaney became a big sister to her brother, Walker. Their relationship has been such a blessing. They are best friends, and Walker keeps her busy with his constant chatter and exposure to his many interests. Walker has learned to be a patient friend, and to treat all people with kindness and respect.

Delaney continues to surpass all expectations and limitations put on her by the world. As a passionate advocate for inclusive education, I have fought to have Delaney included in a general education classroom with her typical peers at least 80% of her day since 4k. Early on, it was suggested she should only be included during related arts, lunch, and recess. They questioned if she could behave or keep up academically. By the second semester of kindergarten, she had mastered her behavior plan, succeeded academically, and made many genuine friendships. She also excelled in after school activities, like karate and gymnastics. She did even better during first grade, and then COVID hit. We homeschooled her for second grade, and moved to another part of the Upstate. As we approached third grade, I had to convince a brand new school of her worth, and of our vision for inclusive education. She has had an incredible year! She maintained an A average in math for the 1st semester of 3rd grade, without any modifications! This means she was doing the exact same work as her typical peers. She has made many new friends, and her teacher has said how much growth she’s seen in her peers because of their interactions with her. Delaney also participated in basketball and soccer this year, and will start cheerleading soon.

I am absolutely positive that our belief in inclusion has made more difference in her life than anything else. Expectations are always high, she is required to work hard and behave appropriately, and she is exposed to so much language and age-appropriate interests by being around her typical peers all day. Her peers are learning skills like empathy, patience, and listening. They are learning to cheer for successes that look different from their own. I am so proud of Delaney for how hard she works to do the same things that come easy to her peers.

Delaney was recently voted “Ray of Sunshine” by her classmates. She is bubbly, sassy, and sweet. She loves to sing, dance, swim, play sports, and watch movies. One of her classmates recently told me, “Delaney changed my life. When you know a person with Down syndrome and they become your best friend, it changes your life forever.” I couldn’t have said it better myself. I was forever changed almost eleven years ago when I met my sweet Delaney Jane.