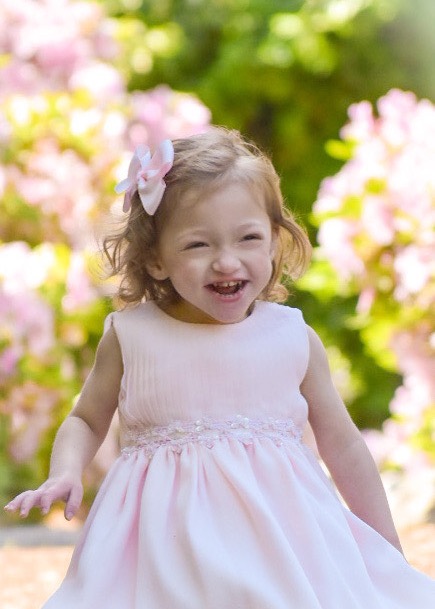 Charlsie Jane was born May 10, 2018 over 3 months early at just 1lb 11oz. I had been admitted to the hospital for 3 weeks due to Preeclampsia and HELLP syndrome. We knew she was going to come early and have a lengthy stay in the NICU. Most preemies typically go home within 2 weeks of their due date. We had no idea all the complications we would face at that time.

At 3 weeks of age Charlsie contracted something called necrotizing enterocolitis, or NEC. It’s the number 1 killer of preterm babies, and it has an unknown origin. The first plan of action was to treat with antibiotics for 10 days. After what was a successful treatment, we thought we were home free. Unfortunately, the infection caused scaring of her bowel causing a stricture. She had her first exploratory bowel surgery on July 1st. They removed a section of her bowel and again we thought everything was okay.

Sadly there was a small amount of infection left over that spilled out causing her to become septic, and kill the majority of her small bowel. The hopes of her surviving were minimal. They called in the Palliative care team and told us to take the weekend to come to terms with losing our baby. We spent every moment with her, had a photographer come and do family pictures, and continuously prayed for a miracle. I remember very clearly coming in and sobbing with one of her NICU nurses asking her, “How do you just give up on your baby?” Her response changed everything, she said “You Don’t, not until she tells you it’s time and she’s still fighting.” Someone finally agreed with us that we had to try everything to save our little girl.

After 2 more surgeries, countless blood products, sleepless nights, and millions of prayers, she started to improve just slightly. Then a little more each day. She was our Princess Warrior. After her 3rd surgery and another bowel stricture, we decided to have her transferred to a specialist at Cincinnati Children’s. Once in Cincinnati, she had an additional 4 surgeries. Charlsie was left with less than 10% of her small bowel, and 1/3 of her colon. She was diagnosed with Short Bowel Syndrome also known as “Short Gut.”

After 259 days in the hospital, we were finally able to bring our baby home! She came home on 24 hours of home IV nutrition using a PICC line, an open abdominal wound, and a Gtube for feeding purposes.

Every time she has a fever over 100.4 we have to be admitted to the hospital to ensure she doesn’t have a PICC line infection. Luckily I’m a nurse, but my husband had to learn how to do wound care, sterile dressing changes, sterile IV nutrition hookups, and Gtube feeds. It was scary being responsible for this tiny human with so many issues and attachments.

Now at 3.5 years old, Charlsie continues to defy all the odds. While she remains very delayed, and has an oral aversion, she’s the happiest toddler around. We have nurses who come for her PICC line care every week. PT, OT, speech and feeding therapy are part of our weekly routine as well. We just got word from her team in Cincinnati that they’re going to start to wean down her TPN (IV nutrition) with hopes of having her off and getting all her calories through her Gtube over the next 1-1.5 years. We all cried tears of joy! Just another “she’ll never” my amazing daughter is ignoring. Our Princess Warrior is determined to defy odds again and again. As her Doctor tells us every 3 months when we go to see her team,  “I don’t know what to say. She is an absolute miracle.”