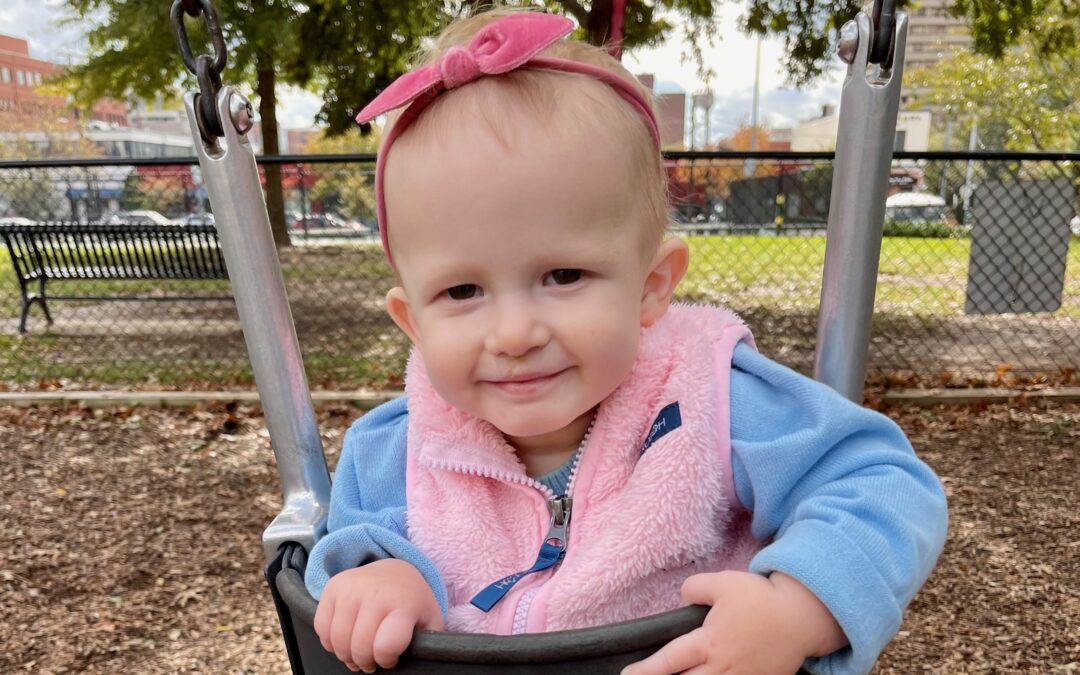 Our sweet little Caroline was born early at 34 weeks and was admitted to the NICU immediately after delivery. Like most NICU stays, we had good days and bad days. We were told that our little girl was a typical preemie and would just need time to get the hang of eating as a “feeder and grower.”

After 21 days in the NICU we went home and thought eating would “click” for Caroline. Unfortunately, when we got home that never happened. We slowly watched our little baby drop her weight down to the 1st percentile and spent hours on end struggling to get her to take even an ounce of milk. Time was spent wondering if our child would even survive as she was so lethargic and not eating. We knew something was wrong but could not put our finger on it and began begging our pediatrician to help us figure it out.

In January we were sent for an outpatient swallow study that revealed Caroline was aspirating everything she swallowed. We were admitted that night to the Children’s Hospital and four days later a g-tube was placed allowing us to finally feed Caroline safely. We were discharged home and realized that our lives as parents now looked much different than we had initially anticipated. Between multiple specialists and therapists, we averaged 8 medical appointments a week!

The months that followed were dark and scary. We learned that Caroline went apneic 52 times an hour while sleeping, putting a strain on her heart and she began to develop heart failure. Her muscle tone was weak, and we were told that she probably wouldn’t walk until age 2. It was heart breaking constantly being told things that were “wrong” with our child. In our eyes she was fearfully and wonderful made.

In April, we got Caroline’s genetic results back. Part of one of Caroline’s chromosomes was missing. This helped to explain her swallowing difficulties and poor muscle tone. It also allowed us to get other necessary specialists on board in her care. Caroline continues to work hard with her therapists multiple times a week.

This fall, we were given an opportunity to participate in an intense feeding therapy program in Virginia, and we are excited to announce that Caroline is now taking the majority of her calories by mouth! She is also so close to walking! With the love and support from Caroline’s medical team, our family, and friends, Caroline has made it to her first birthday (many times this past year we were afraid we wouldn’t).

This wasn’t what we imagined when we thought about having kids, but it has been one of the best adventures of our lives. Caroline’s strength and determination is contagious. We are constantly amazed at the obstacles she continues to overcome and the loves she displays. Ryan and I are truly honored to be her parents and love having a front row seat to watch her now thrive and grow!