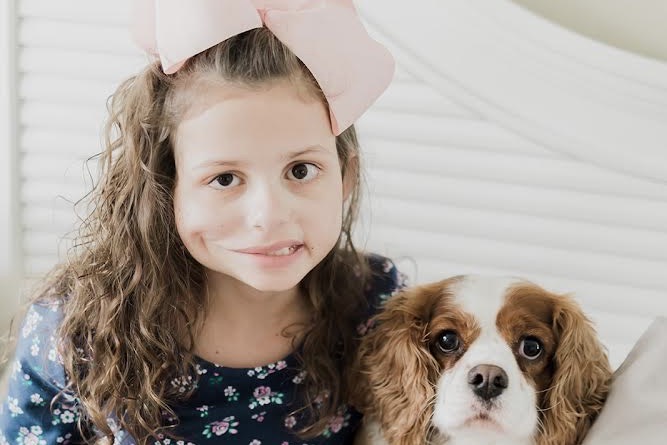 Meet the Wright family and their daughter Calleigh.

﻿In June 2014 we were planning a return Disney trip and first day of school outfit, until one day our four year old, Calleigh, started vomiting and couldn’t stop. We were admitted for dehydration and over the course of less than 24 hours she became lethargic. The decision was made to transfer her to Greenville for an emergency CT. In the time it took to drive by ambulance to Greenville she became completely non responsive.  They carried her to CT and returned shortly to tell us they had found a mass and that her inter-cranial pressure was extremely high. She would need an emergency drain placed to avoid emergent surgery. We were whisked to the PICU and the procedure was done at bedside. Quickly, she recovered consciousness and asked for a cheeseburger. It was not until later we asked how emergent this was and the nurses told us she probably only had an hour left to live.

The drain gave the staff time to plan to remove the mass. Two days later, the mass was removed and it was confirmed to be Medulloblastoma. Our world stopped.  This had definitely not been our plan. Family, friends, and church rallied around us to carry us through the next days, months, and years.

Calleigh endured 30 radiation treatments, two more brain surgeries, 9 rounds of chemo and numerous hospitalizations before she was considered to be off treatment.

Once your child has had an experience like this life can never go back to “normal.” We had to find our new normal. We still deal with post treatment issues even today. A cancer diagnosis echoes across a child’s lifetime and new issues arise as they age.

Calleigh is now 12. We find JOY in her resilience and grace to deal with whatever comes. Calleigh is the strongest and bravest girl we know. She loves God, Disney, mermaids, singing, and her baby brother. She says, “I’ve been through a lot and it was scary. Even though I might look a little different, I don’t want to be made fun of and I want to be treated like everyone else.